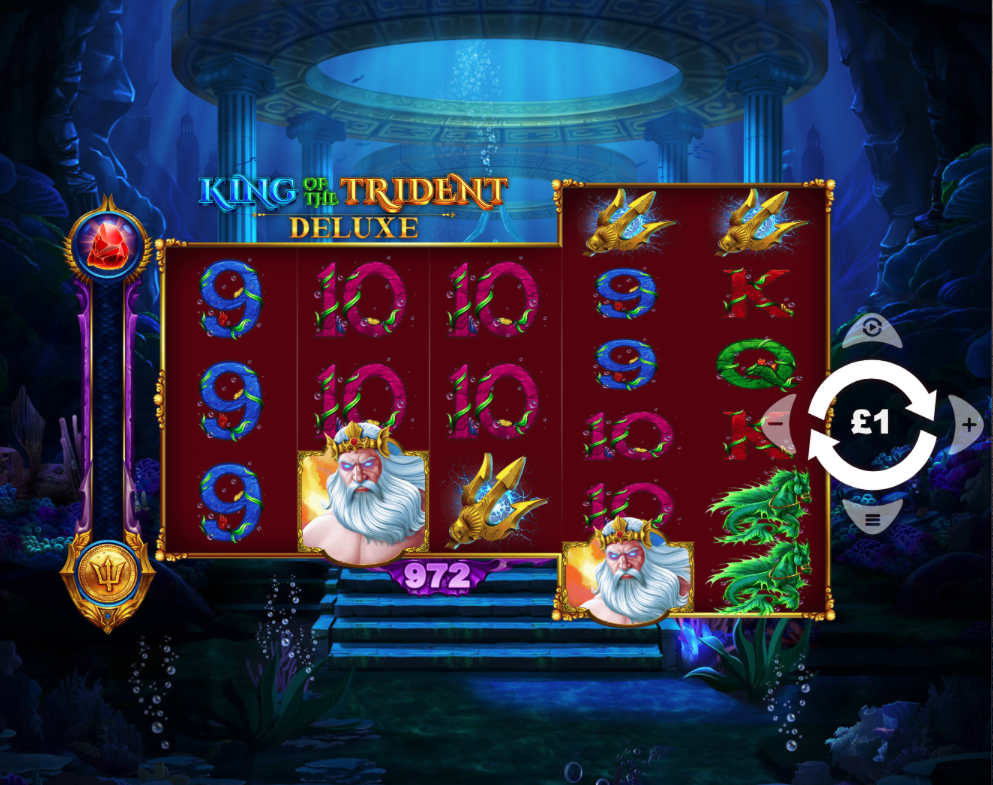 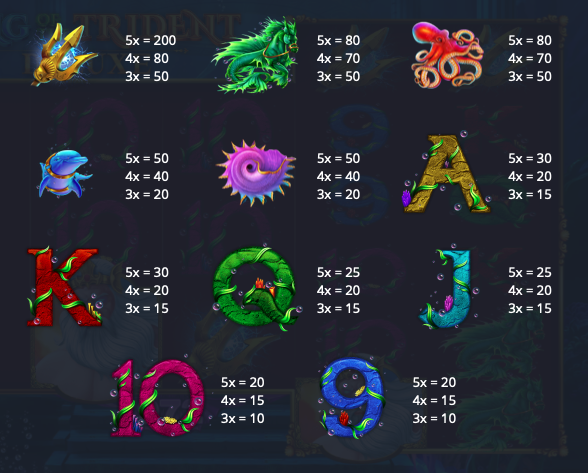 Deep beneath the ocean waves lives the Greek god Poseidon, ruler of this watery realm and also the inspiration for this online slot from Pariplay; it’s called King of the Trident Deluxe and it comes with giant symbols, free spins and Trident meter feature.

King of the Trident Deluxe is a five reel slot with three/four rows and 972 ways to win; an impressive, circular structure forms the backdrop to those reels, creating an underwater atmosphere suitable for a deity.

Higher value symbols include the trident, the sea horse, the giant squid the dolphin and the shell; 9, 10, J, Q, K and A make up the lower values. Poseidon himself is wild and he’ll replace all other symbols except for the Ariel scatter.

Some symbols are surrounded by a blue glow and when every one on reels one, two and three is in this state then the Giant Respin is triggered; those reels will now only contain large, 3×3 symbols for the respin.

Landing three, four or five of the Ariel scatter symbols anywhere in view will award 8, 12 or 40 free spins respectively; one or two scatters during this feature will award 2 or 4 extra spins, up to a maximum of 20. Reels four and five will only feature 2×2 symbols during this round.

Gold tokens can overlay symbols during the base game and these are collected to slowly fill up the meter on the left hand side; filling the meter displays the map view which has four stages with smaller cash prizes in between.

Each time the meter is filled the player moves on one position, winning cash prizes until they reach the next main stage – the Legendary Free Spins which offer the following on a 6,6,3,3,3 reel layout.:

Any slot with a meter feature seems to add a little extra entertainment and that’s certainly the case with King of the Trident Deluxe; it’s quick and easy to fill the meter and the free spins and Giant Respins seem to hit regularly as well. If you’d like to try the original King of the Trident then please click here.