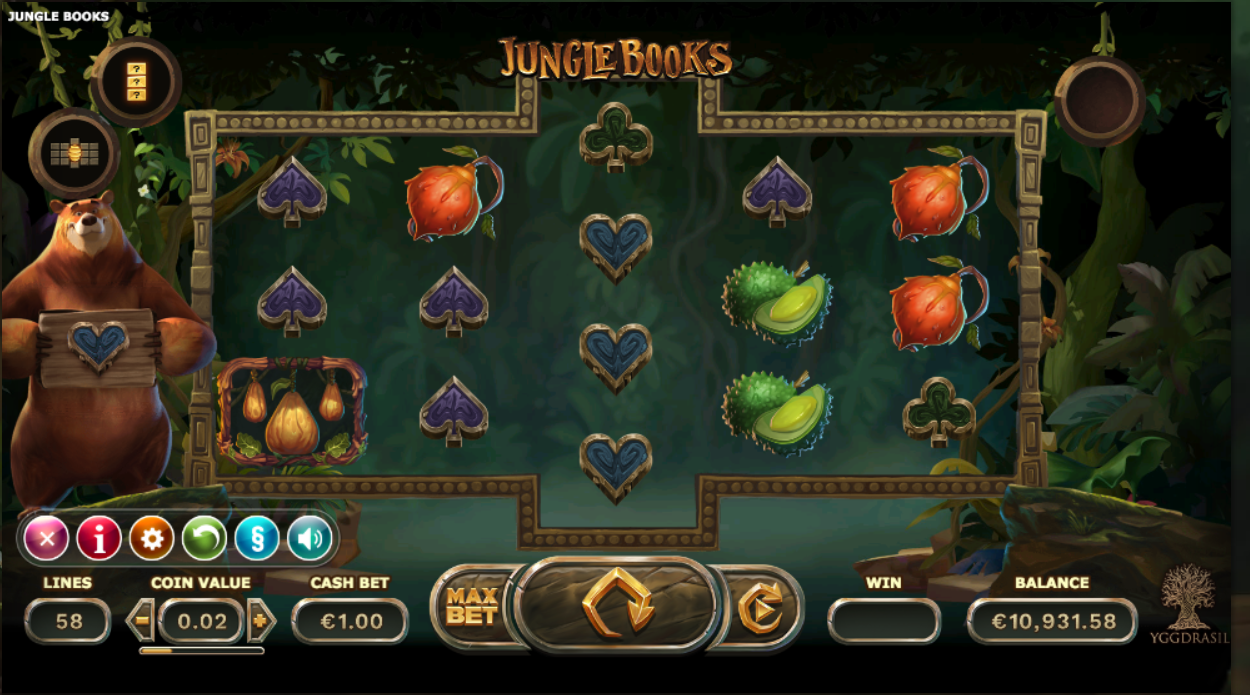 Jungle Book is Rudyard Kipling’s collection of tales featuring various wild animals and this online slot from Yggdrasil Gaming is clearly based on those stories except that it’s called Jungle Books (that all-important ‘s’) and the animals involved aren’t named. It’s good stuff though and you can read all about it below.

Jungle Books is a five reel slot with three rows and 58/68 paylines and the first thing to say about this game is that the gameplay, features and the reel sets depend on the realm in which you’re playing; there are five realms and you will know which realm you’re in by which of the five animals stands to the left – the bear (Baloo), the panther (Bagheera), the boy (Mowgli), the tiger (Shere Khan) and the snake (Kaa). The hosts of these realms come and go randomly but the previous host may also appear as a guest on the right hand side of the reels.

There are six high value symbols and these are all tropical fruit which we’ve had some trouble identifying but they mostly look tasty; playing card symbols represent the lower values. The wild symbol is a gold ‘Wild’ and it will replace all others to form winning combos.

All the features in Jungle Books occur during the gameplay and they depend on the realm in which you are in; there are also extra features in that realm depending on the guest to the right of the reels:

If a guest appears on the right hand side and a feature is triggered by the host, it will be enhanced by whichever feature the guest activates; for example the boy in the realm of the snake or panther will sync reels two, three and four rather than reels one and two/three and four.

Jungle Books is one of the more complex online slots we’ve had to decipher and hopefully the above explanation is clear; once you get your head round it it’s very clever though and well worth checking out. The graphics and animations are superb and it comes with an RTP of 96.10%.