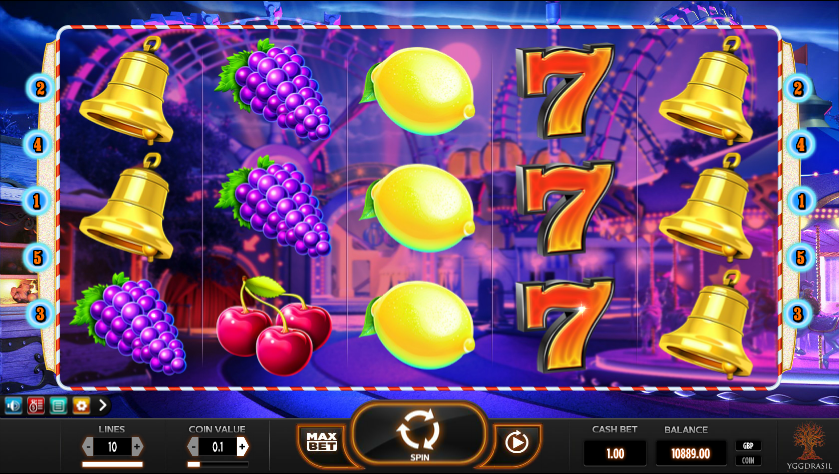 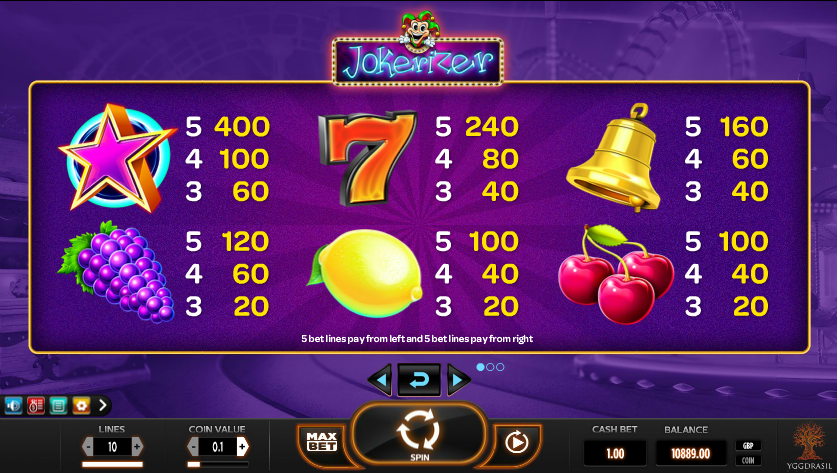 If you’d like to try an online slot which at first glance looks fairly traditional but which turns out out to have some hidden surprises than this may just be thing for you. Jokerizer is a glossy looking release from Yggdrasil Gaming which sparkles with fruity symbols but watch out for the Joker.

Jokerizer plays out over five reels and just ten paylines and the interesting feature here is that five of the paylines run from left to right and the others run from right to left. The backdrop to the reels is some sort of deserted fairground where the lights are still on but nobody’s home.

There are six main symbols and they’re all shiny and glossy and include cherries, lemons, grapes, bells, sevens and purple stars. The only other symbols is the Joker scatter – he appears only on reels two, three and four and is the key to all the bonus features in this game.

If you can land three jokers on the centre three reels during the base game you will trigger the Mystery Win; you will be awarded a prize of between 1000-6000 coins. Three in a row horizontally or diagonally is a guaranteed 6000 coin win.

This is what it’s all about and you will have the chance to play this feature every time you land a win. You can collect your winnings or you can use the big Joker button below the reels to kick this off. Each spin will cost 20 coins and this is deducted from the sum you won in the triggering spin.

There is a higher chance of winning during the Jokerizer round and you will also only need two Jokers to trigger the Mystery Win feature. It will land more often of course but the prizes begin at a lower level – 20-6000 coins.

When your Jokerizer winnings have reached zero you will be taken back to the base game.

If you are using the Autoplay feature, bear in mind that the Jokerizer feature starts automatically following a win – there’s no option to collect your winnings.

This is a really entertaining game with some innovative features to enjoy. The graphics are of a very high quality and there’s a nice high RTP of 98.00%. Give it a go.