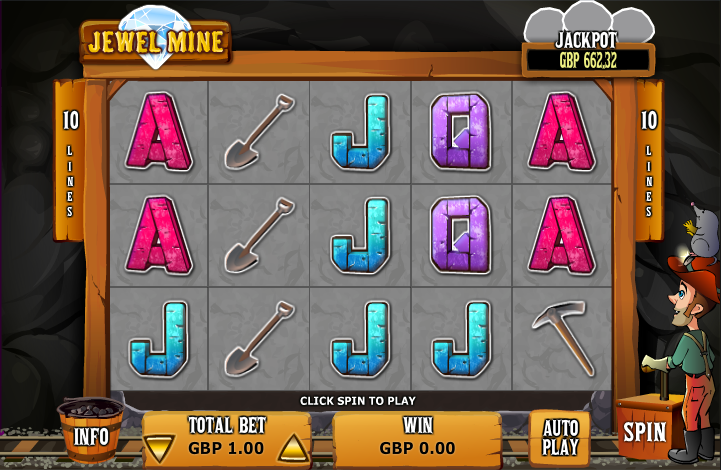 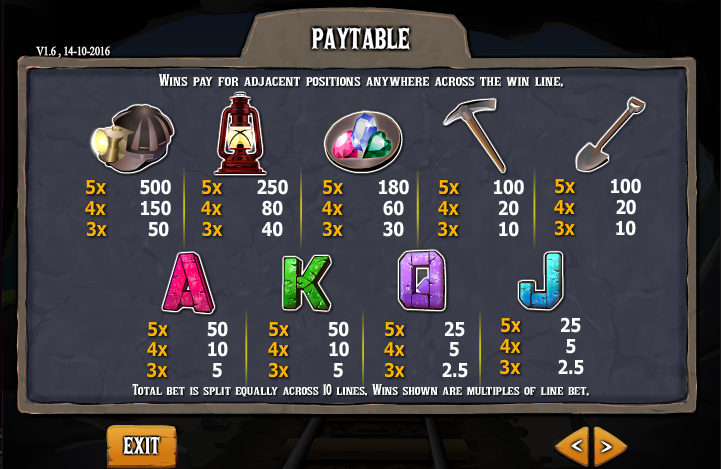 
Ah mining – the faithful old theme we return to regularly when checking out an unreviewed online slot machine; this one’s called Jewel Mine, which should give you some idea about what’s being unearthed underground, it’s developed by Playtech/Virtual Fusion and it comes with a tasty progressive jackpot.

Jewel Mine is a five reel slot with three rows and ten fixed paylines; the design may be a quite basic but we like it and the reels spin within a solid timber frame which is presumably also supporting the roof of the mine. The miner stands poised underneath at the end of a length of railway track.

There are five theme-related symbols on show and these include a miner’s helmet/torch, a gas lamp, some jewels, a pickaxe and a shovel; J, Q, K and A represent the lower values.

There are no wild or bonus symbols in Jewel Mine but fear not – there are still extra features as described below.

Jewel Mine gameplay unsurprisingly  involves creating wins and when you do those reel positions below the wins will explode; five explosions on a single position will reveal a jewel which will awarded a multiplier of your total stake:

When all positions have been cleared you will get to play the Jewel Cavern Bonus in which you get to detonate some explosives in three different caves; these explosions will reveal more jewels and award prizes in the process.

If you are lucky enough to uncover three diamonds during this round you will win the progressive jackpot total, which is based on your total stake so for example if your bet is 1.00% of the maximum you’ll win 1.00% of the prize and so on.

The Jewel Cavern Bonus can also be triggered by filling all positions with the miner’s helmet/torch symbol.

Jewel Mine may look a little basic but there’s lots to like about the gameplay and the bonus feature offers something a bit more creative than the standard fare; of course there’s also the progressive jackpot to enjoy and an RTP of 95.00%.