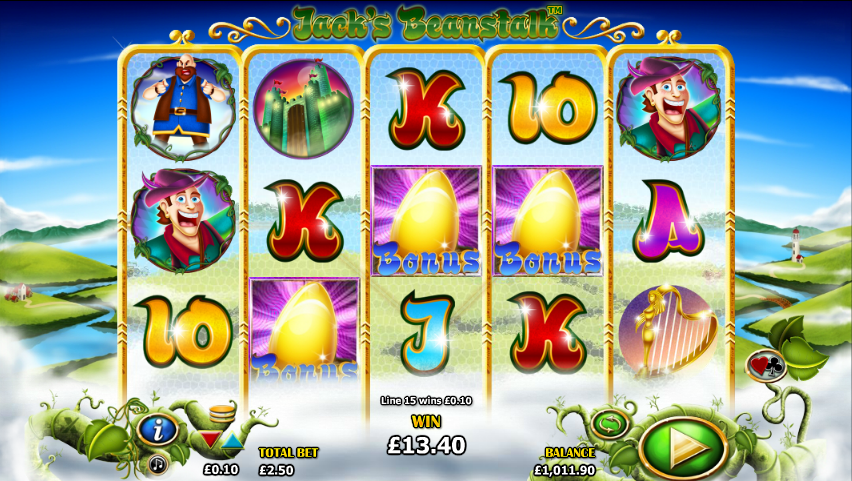 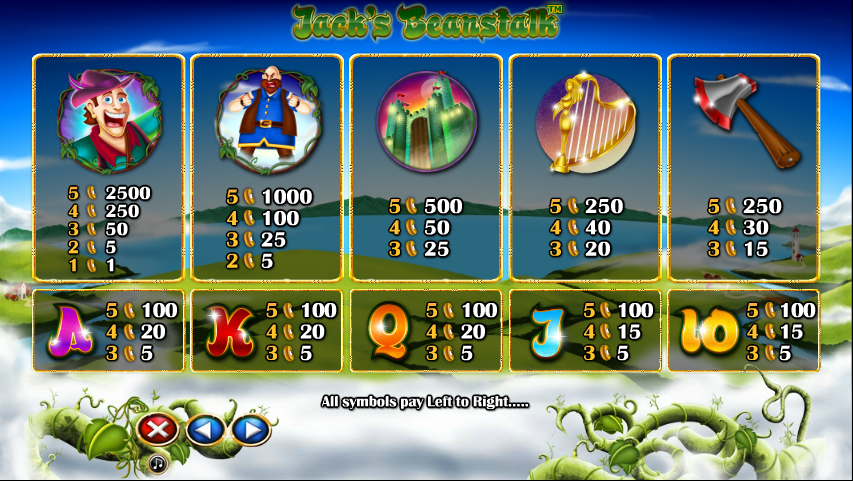 We always like to see an online slot based on a famous fairytale and here we have one more from NextGen Gaming based on the story of Jack and the Beanstalk. It’s not the first, Net Entertainment have a very good one you can read about here but Jack’s Beanstalk stands up on it’s own (excuse the pun) with two clever bonus features and some great graphics.

Jack’s Beanstalk is a five reel slot with three rows and twenty five fixed paylines; the gold-framed reels sit atop the beanstalk, somewhere up in the clouds with a view back down to a verdant landscape of green meadows and sparkling rivers.

The high value symbols are theme-related and include a grinning Jack, the giant, the giant’s castle, a harp and an axe; 10, J, Q, K and A make up the lower values.

There’s no standard wild symbol but there’s a magic bean which appears on reels two, three and four and a golden egg scatter symbol which activates one of the other features.

This is triggered by landing three of the golden egg scatter symbols anywhere in view; manage that and you will be transported to a screen with five geese each sitting on their own cloud. All you have to do is pick three for three multiplier prizes which can range from 25x to 2500x your total bet.

This is one of the more creative bonuses we’ve seen and it’s triggered by landing at least one of the magic bean symbols anywhere on reels two, three and four.

You will now receive three free spins and on each reel where there was a magic bean a wild symbol will grow from the bottom upwards so that by the third spin that reel is completely wild. If you land any more magic beans during this round the feature will continue.

Any win can be gambled and you will have the chance to double or quadruple that win by correctly guessing whether the next playing card is the correct colour or suit. There’s a maximum of five correct guesses.

Jack’s Beanstalk is eminently playable and a very good alternative to Net Ent’s Jack and the Beanstalk; the bonus features seem easily triggered and the graphics/animations are very nice. There’s a perfectly acceptable RTP of 95.46%.