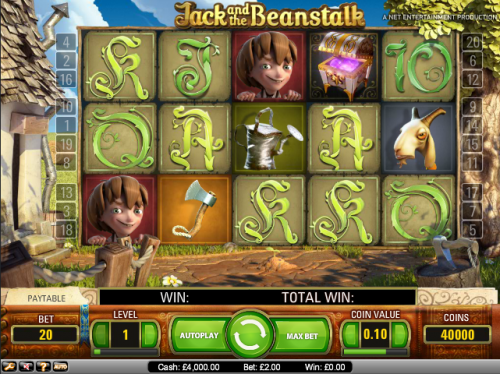 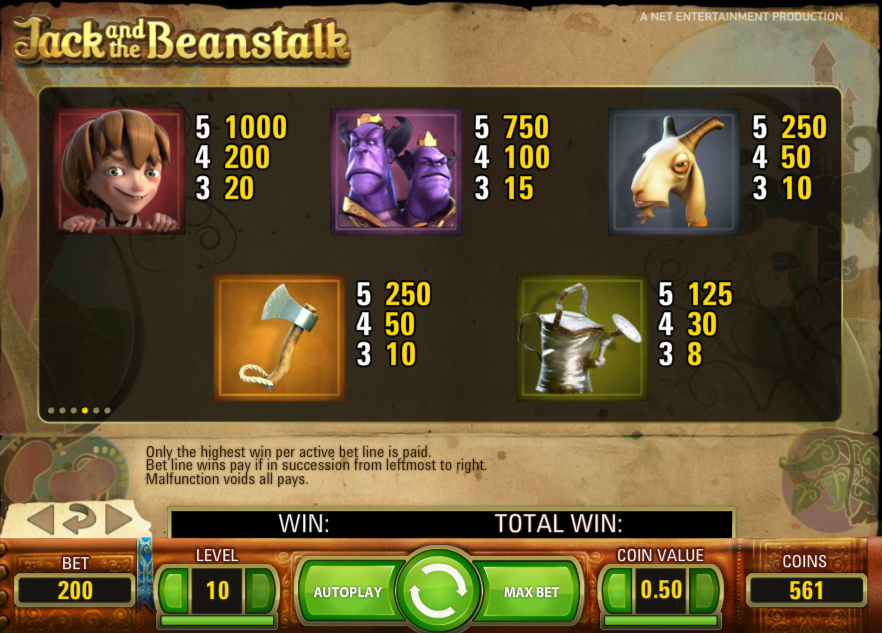 Children’s stories and nursery rhymes are always a good basis for online slots; we’ve reviewed loads in the past and the fantasy elements combined with some creative bonus features always seem to come up trumps.

Net Entertainment have turned their attention to Jack and the Beanstalk in this release and as we’ve come to expect from this company it’s a graphically impressive game.  Jack and the Beanstalk tells the tale of a young by who plants some magic beans which grow into a giant beanstalk; Jack climbs up and encounters a giant and his wife, becoming enriched in the process.

The opening movie reveals a castle in the clouds accompanied by some uplifting music and then you enter the main game.  The low value symbols are ornate playing cards while the higher value are represented by a watering can, an axe, a skinny cow, the giant and his wife and finally, Jack.  The scatter symbol is a treasure chest and the wild is the game’s logo.

Landing three or more of the treasure chests anywhere on the reels will trigger the free spins game.  You’ll get ten spins with an extra five if you can and another three treasure chests.

That’s not all though and will this bonus game is in play you are trying to collect keys on reel five; doing this will unlock the following features:

The money bags, golden hen and harp are the items Jack steals from the giant in the original story.

This a lovely, playable game from Net Ent and it looks great; we don’t expect anything less from this company and in addition there’s also a couple of bonus features to keep you interested.