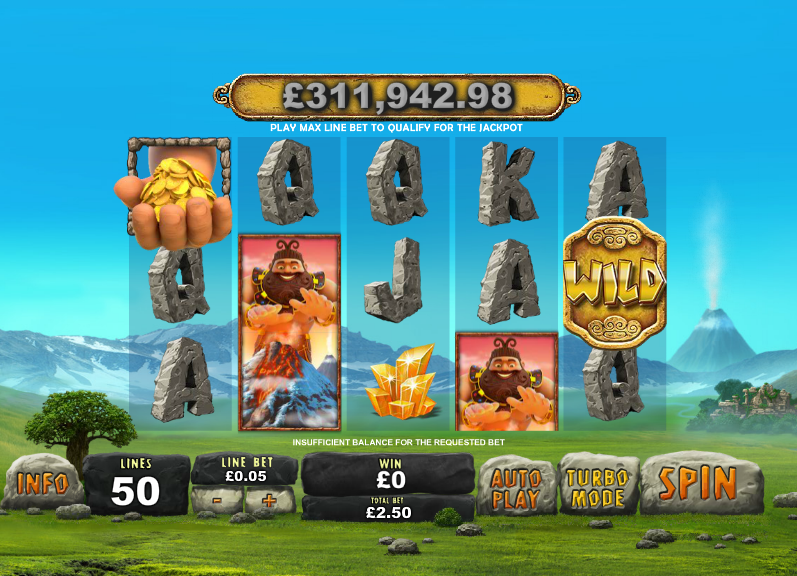 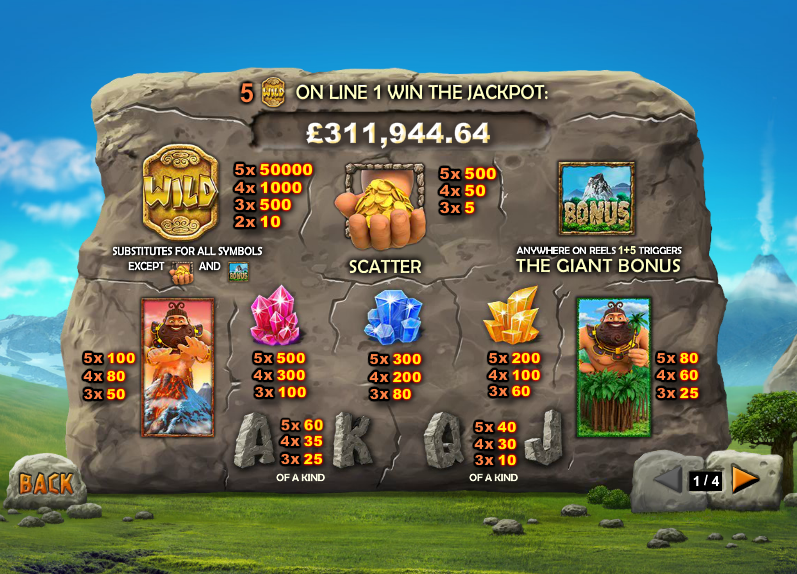 Watch the intro movie the first time you play this game and you’ll have a pretty good idea what’s going on; a giant flicks a gold coin into a volcano resulting in an eruption of coins over the landscape, no doubt harming some of the normal-sized residents. This is Jackpot Giant and it’s a new online slot from Playtech set in a sunny but volcanic land. It comes complete with a bonus game and a progressive jackpot.

Jackpot Giant is a five reel slot with three rows and fifty fixed paylines. It’s really nicely-designed and the crisp transparent reels hover above a collection of rocks displaying the various game options. The background contains grassy plains stretching towards the foothills of snow-capped mountains and a smoking volcano.

The high value base game symbols include red, blue and yellow gems and two views of the giant, both of which appear stacked on the reels meaning that they can theoretically cover all positions on one reel. J, Q, K and A are the lower value symbols.

There’s a big gold wild symbol, a volcano bonus icon and a scatter symbol represented by a giant’s hand full of coins.

This mini-game is triggered by landing the volcano bonus symbols on reels one and five in the same spin. You will now be taken to a screen displaying the giant standing behind six smoking volcanoes and your task is to pick three for a cash reward. With each pick the giant will flick a coin into that volcano and your prize will be revealed. If you’re lucky a pick may reveal a chance for another pick.

To qualify for the progressive jackpot you must be playing at the maximum bet level per line and it’s won by landing five of the gold wild symbols on payline one (horizontally across the middle row). The current total is shown above the reels in the base game.

Jackpot Giant is a really good-looking slot which ticks along nicely with regular wins. Our only gripe is a lack of bonus features and a slightly stingy RTP of 94.22%.