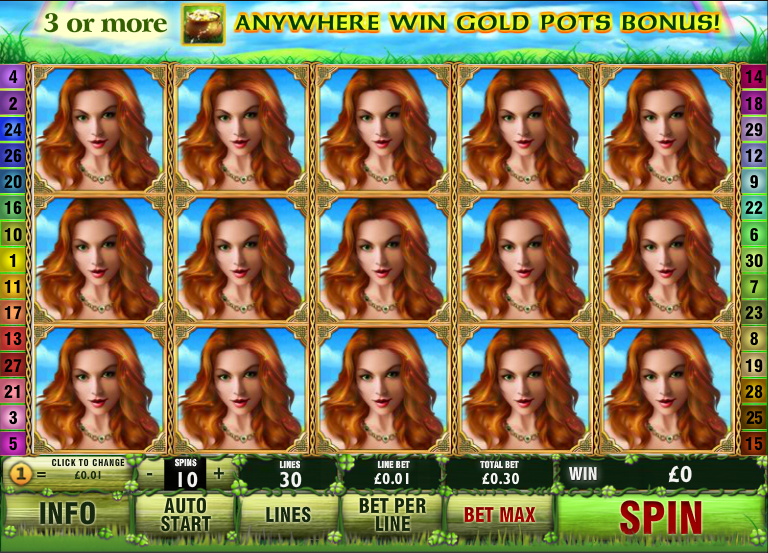 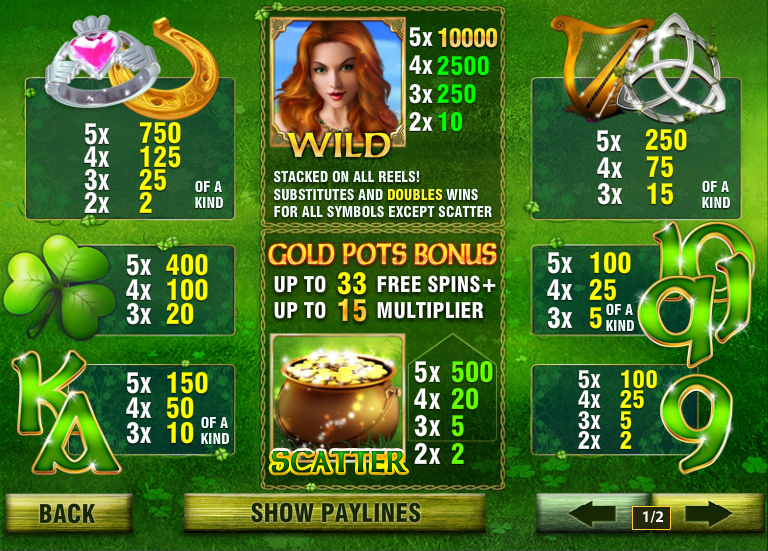 A trip back to the Emerald Isle awaits those willing to have a bash at Irish Luck. It’s the latest in a long line of Irish-themed online slots which don’t tend to deviate too much from a particular format but that doesn’t really matter as long as they’re fun to play and (occasionally) profitable. This one’s from Playtech and you can read all about it below.

Irish Luck is a five reel slot with three rows and up to thirty paylines; greenery and rainbows are the overwhelming design feature here but there doesn’t seem to much rain which, in our experience, is one of the memorable things about a trip to Ireland.

There are some distinctly theme-related icons on show here including a golden harp, a four leaf clover, a Celtic brooch, a golden horseshoe and a silver ring; the lower values are the standard 9, 10, J, Q, K and A but accessorised in sparkling green.

The wild symbol is a red-headed girl who appears stacked on all reels to help out with your winning combos; she’s also worth 10000x your line stake for five on an active payline and she will double any wins to which she contributes. The scatter symbol is the pot of gold and it also activates the feature.

This is the game’s only extra feature and it’s triggered by landing three or more of the gold pots anywhere in view; you are awarded eight free spins initially but before the round starts you will be asked to pick two out of the five pots on show which will may award more spins and multipliers. There’s a total of 33 spins on offer and a 15x multiplier but the feature can be re-triggered by landing more gold pots.

It’s difficult to know what to make of yet another Irish-themed slot but this is perfectly fine to play, it’s of a high quality and the free spins round offers something a little extra. There’s no reason not to give it a go and there’s an RTP of 94.25%.