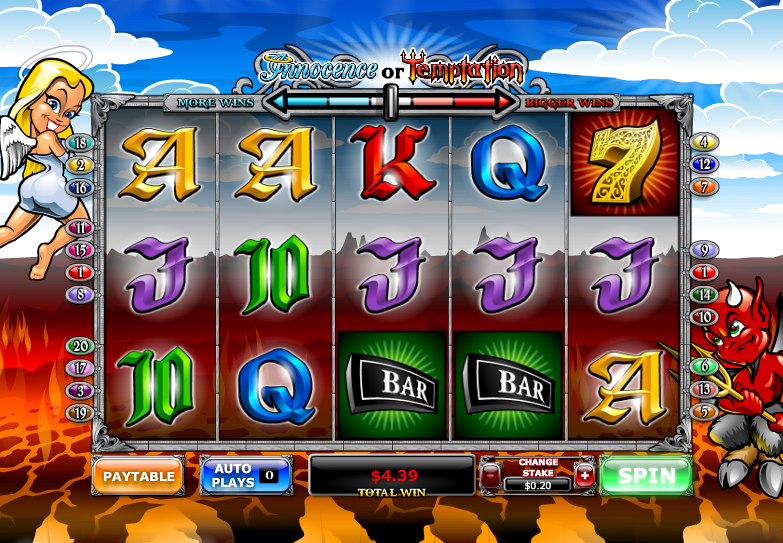 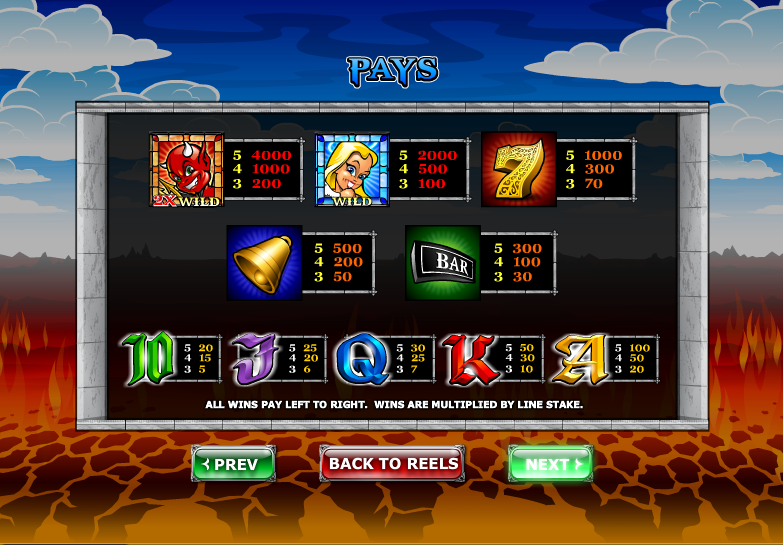 Most of us face a constant inner struggle as the naughty and nice sides of our personalities right for dominance. Innocence Or Temptation is an online slot from Playtech which illustrates that conflict using little angels and devils and it also includes a feature allowing players to adjust the variance of the game; read on to find out more.

Innocence Or Temptation is a five reel slot with three rows and twenty fixed paylines; the default screen displays a a whiter-than-white angel in the top left hand corner and a mischievous devil in the lower right hand corner. The background changes if you use the slider above the reels but this is explained more below.

There are just three high value symbols – the bar, bell and seven – with the remainder made up by the usual 10, J, Q, K and A.

The angel and the devil are both wild although the devil is the highest paying and will multiply any wins to which it contributes by 2x. The Innocence Or Temptation logo is the scatter which activates the main feature.

You will notice the blue/red slider above the reels and dragging it with the mouse will move it from left to right. Moving it left will increase the number of wins and triggered bonuses but decrease the value of those wins; moving right will decrease the wins landed but increase their value. The background will change as you move the slider – left will upwards into the blue sky while right will head down into the fiery depths.

This is a randomly occurring award which will zap the reels with lightning, building up a cash prize for as long as it lasts.

Landing three of the Innocence Or Temptation scatter symbols anywhere on reels two, three and four will trigger the free spins and you will receive just five initially.

After each spin you get to elect one of four cards which will award one of the following:

Changing the slider and therefore the payout rate will ultimately have no effect on your long term winnings but the free spins should be triggered more regularly if you like that sort of thing.

There’s not much wrong with this slot apart from a rather low RTP of 94.16%. There’s plenty of feature to keep everyone interested and a free spins round with a bit of creativity. All worth checking out.