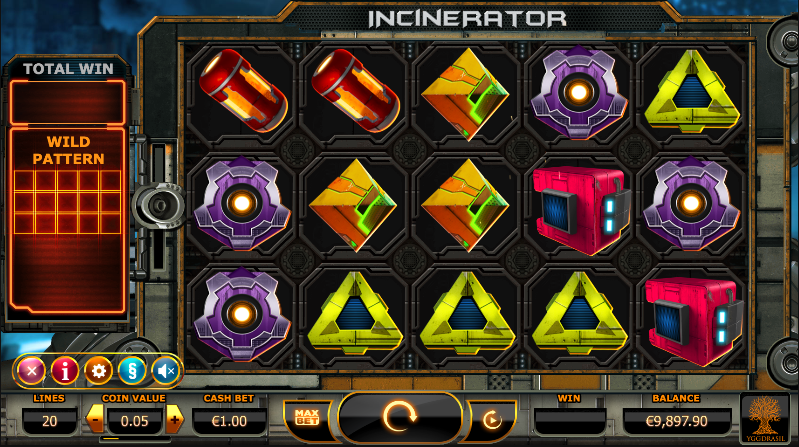 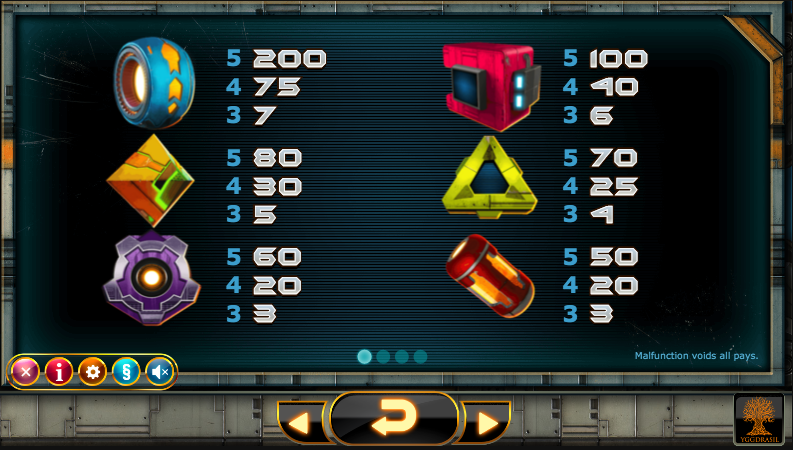 On some distant corner of Earth, or perhaps on another planet where industrial waste is also a problem there’s a giant waste disposal site which has now become the inspiration for this online slot from Yggdrasil Gaming. It’s called Incinerator and the theme is one of science fiction mixed with municipal rubbish disposal – how can that not be a winner? It’s actually really good and you can read all the essential details below.

Incinerator is a five reel slot with three rows and twenty fixed paylines; the reels are futuristic, metallic and they sit against a dark and brooding backdrop. On the left hand side is the Wild Pattern box which we’ll explain in more detail below.

There are just six symbols in this game and they variously-shaped lumps of metal trash best identified by colour – blue, red, yellow, green, purple and orange.

The wild symbol is represented by another metal lump with a glowing light inside – it substitutes for all others to make winning combos.

This is feature which appears in a number of slots and it’s always a favourite of ours – it also known by such names as Rolling Reels and Exploding Reels. Each time you land a winning combination on the reels, you’ll receive a payout and then those symbols will disappear to be replaced by more falling in from above. The new arrangement may then make more combos and this process continues until there are no more wins.

You will see that the Wild Pattern box to the left of the reels cycles through ten predetermined symbol patterns; if you can land three wins in a row during the Cascading Symbols then wilds will be placed on the reels in the active pattern for that spin. This should always result in a decent win.

Get three more wins and you’ll receive one of six better wild combinations – the two sets are shown below.

Yggdrasil Gaming make some really compelling slots and this is another to add to the list; gameplay is very fast (perhaps a little too fast) and the bonus features are well-designed and enjoyable. The RTP is 96.00%.