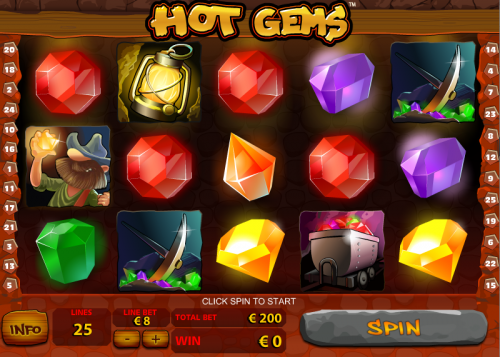 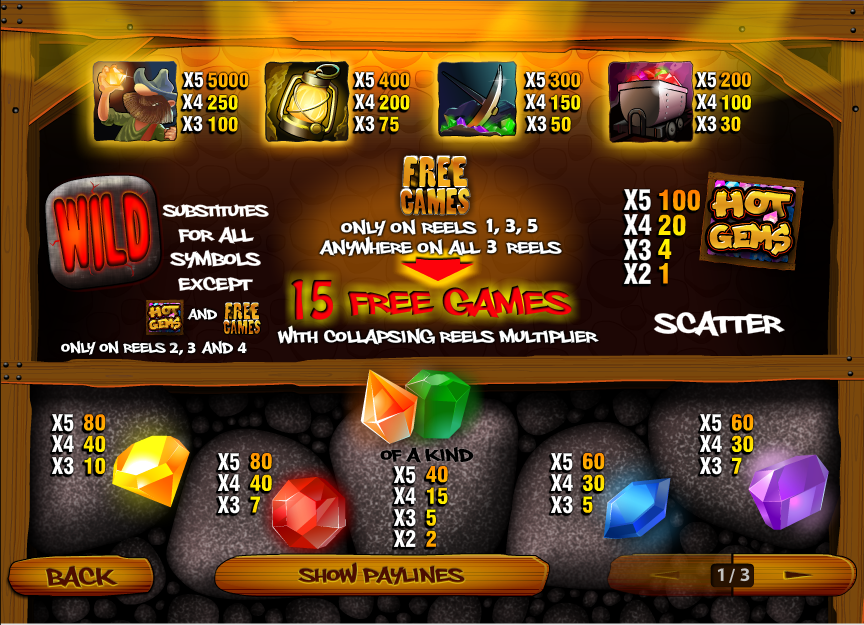 Playtech, respected purveyor of quality online slot machines have come up trumps with another cracking game – Hot Gems.  Hot Gems has been around a little while now but it’s an addictive and quirky slot with some innovative features which will keep you coming back for more.

The setting for Hot Gems is deep underground in a gems mining facility; the opening video for the game follows an old timer into the mine where our bearded hero takes a pick axe to a rock and cracks open a seam of gleaming objects.

There are no playing card symbols here and the pictures on the reels are as follows – red, green, purple, yellow, blue and orange gems plus a mine cart, the miner, a lamp, and a pickaxe.  There’s also a Wild symbol, a Hot Gems scatter symbol and a Free Games symbol on reels one, three and five.

Before we get to the bonus features, possibly the most interesting innovation is the ‘collapsing reels’ feature.  We’ve only seen it on various other slots and it’s almost worth a free spin every time you land a winning combination.  If you are lucky enough to win some money with a combination, the symbols involved in that win will explode, allowing the space to be filled by the symbol above, introducing new ones from the top of the screen.  This of course gives you the chance to make new winning combos and can carry on for as long as you keep winning.

The scatter symbols in Hot Gems do not trigger a bonus game but even landing two will provide a cash prize and a bet multiplier.

This are five reels and twenty five fixed paylines which means at the minimum stake of €0.20, the minimum cost per spin is €5.  For the big spenders that can be increased to €500 per spin.  The jackpot can be won by matching five of the miner symbols for a top prize of 5000 coins.