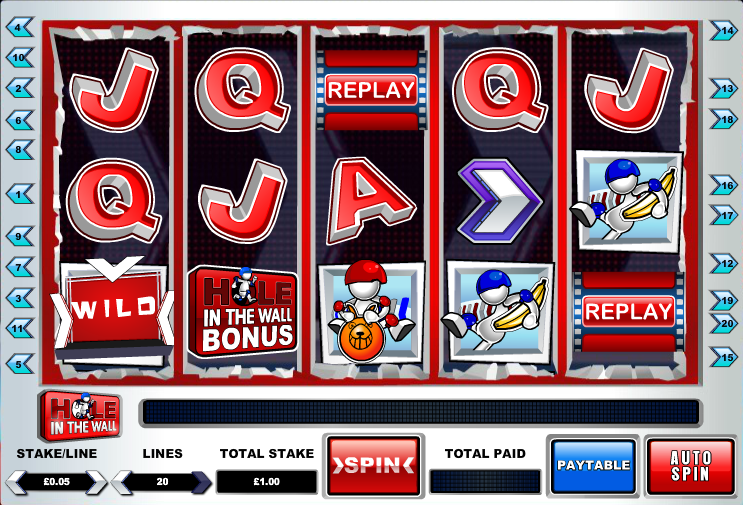 Among the short-lived series that have appeared on British television, Hole In The Wall is one of the more bizarre and unsurprisingly it was based on a Japanese game show called Brain Wall. The idea was for contestants to contort themselves into a shape to fit through a hole in a moving polystyrene wall and this online slot is Fremantle’s attempt to bring this concept to the reels.

Hole In The Wall plays out over five reels and twenty paylines and the design of the game is similar to Fremantle’s other TV-themed games, set as it is against the backdrop of a television studio.

The basic symbols are the usual J, Q, K and A but designed in a slightly quirky manner while the higher values are two contestants – one on a space hopper and one holding an inflatable banana, the referee, a blue arrow and then red team and blue team logos.

The wild is a big red ‘wild’and there are two scatter symbols – Replay and Hole In The Wall – which are explained below.

Land three or more of the Replay scatter symbols anywhere on the reels and you will win one free spin – in fact the reels will keep spinning until you land a win. It’s a brief bonus but it seems to get triggered pretty regularly.

Hole In The Wall Bonus

This is the main feature and it’s triggered by landing there of more of the Hole In Wall symbols anywhere on the reels.

Your first task is to pick an initial bonus amount by selecting one of the boys symbols. You will then get to play the game itself; three walls come towards you and you must move the contestant left and right to line up with the approaching hole. It’s pretty easy and the further you progress, the higher the multiplier on the original value you will win.

You don’t need to think too much about playing the bonus feature – just move quickly to the left or right as the wall approaches and the contestant will jump into shape to squeeze through.

This is a really entertaining game and Fremantle certainly know how to design these TV-themed slots. It all looks good and there’s plenty going on, especially the main bonus game.