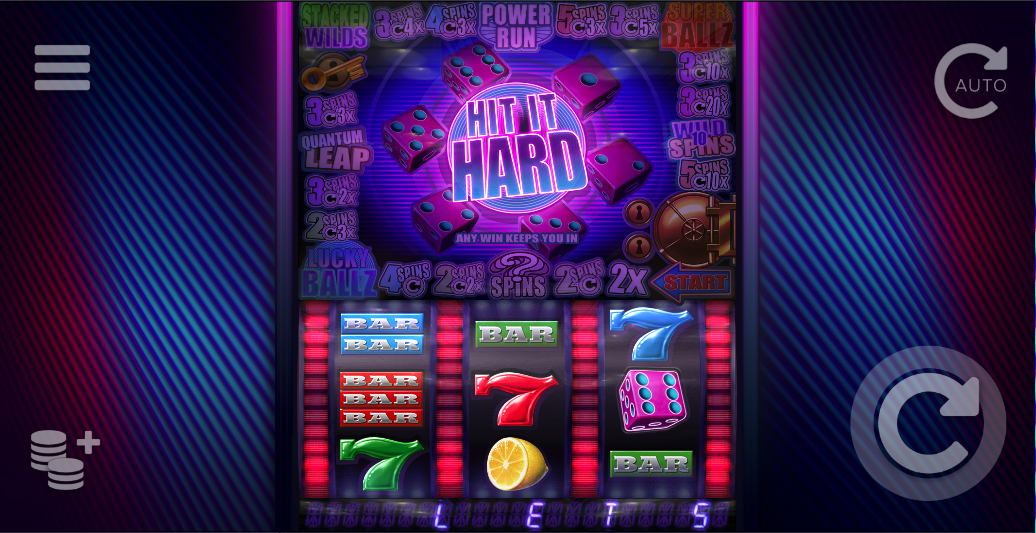 Three reels, a fruity theme and a dice-related bonus game can only mean we’ve got ourselves a UK-style fruit machine here – it’s developed by Elk Studios, it’s called Hit It Hard and it offers players a huge variety of bonus features when that pink dice lands on the middle row.

Hit It Hard is a three reel slot with three rows and five fixed paylines; it’s a fruit machine design in which those three reels sit below the upper area which contains the dice trail and bonus features.

The six symbols are all traditional and include red, blue and green sevens along with watermelons, lemons and cherries. The wild symbol can appear on reels two and three and it will replace all standard symbols to help for winning combos; if a wild with a multiplier lands on reel three it will stay in place for the next spin if it doesn’t win first time round. The dice is the bonus symbol.

The main feature is triggered by landing the dice on the centre row of the third reel; the action now moves to the upper area and the dice is rolled to determine the number of moves along the trail. The possible features are these:

Hit It Hard combines some good old fruit machine gameplay with a raft of well thought out bonus features and attractive looks – it’s bright, modern and well worth some of your reel spinning time.