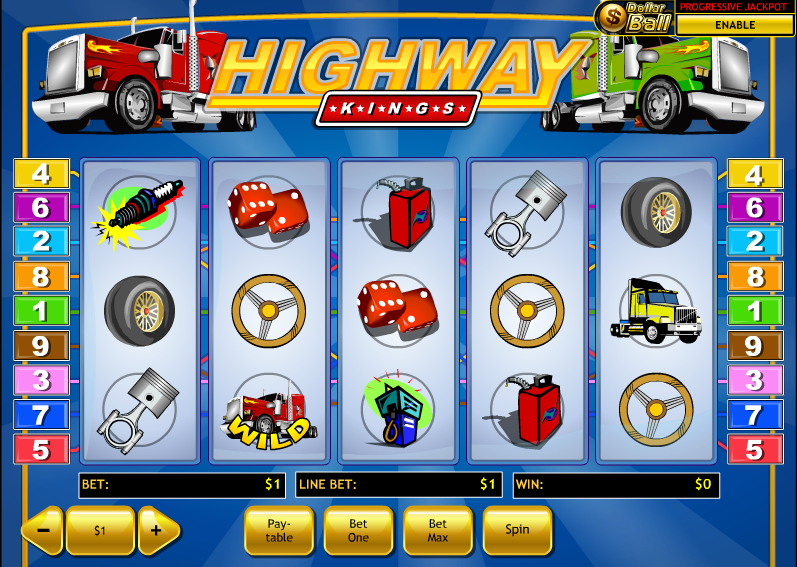 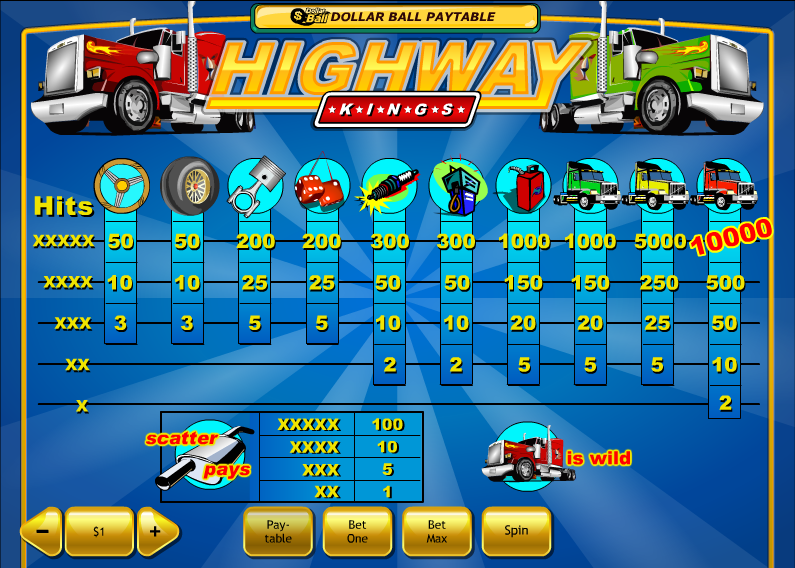 Highway Kings is an online slot which celebrates the life of those truckers and their big rigs which criss-cross the highways and byways of the United States. It’s a lifestyle which has been romanticised in numerous films over the years (our favourite is probably Convoy, the Kris Kristofferson movie) and this is Playtech’s way of doffing their hat to this culture. This is also the game which led to the very popular Highway Kings Pro and there’s a progressive jackpot so keep reading to find out more.

Highway Kings is a five reel slot with three rows and nine paylines and it’s fair to say that it’s pretty basic when compared to more recent machines. Red and green trucks watch over proceedings from above the reels against a plain blue background.

The symbols are all related to theme and include a steering wheel, a wheel, a piston, a pair of dice, a spark plug, a petrol pump, a petrol container and three trucks – green, yellow and red.

The wild symbol is also a red truck but facing to the left rather than to the right; it appears only on reels two, three and four and will substitute for all other symbols, doubling any wins to which it contributes.

The exhaust pipe is the scatter symbol which will payout for at last two anywhere in view.

This is the only bonus feature offered in this game and it’s Playtech’s Dollar Ball mini-game. Click the ‘Enable’ button in the top right hand corner and you will pay a little extra to make part in this lottery.

Pick five numbers between 1 and 49 and with each spin five balls will be drawn. Match one, two or three for a fixed win, four for 1% of the jackpot total or all five for the full amount.

When Highway Kings Pro is available to play there’s really not much to tempt players here but it’s interesting to check out the prequel anyway. We always like a progressive jackpot and there’s a healthy RTP of 97.06%.