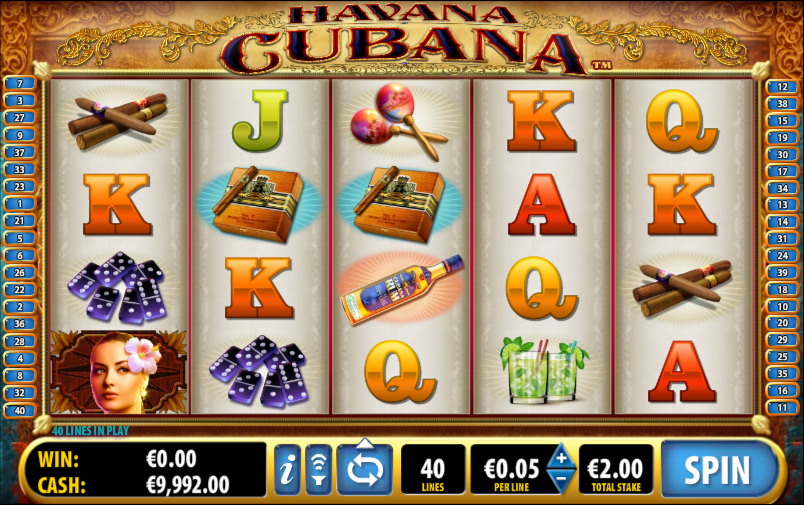 Perhaps you’ve always wanted to go to Cuba but it’s just a little bit too far away; or maybe it’s a tad too socialist. Well why not visit it virtually by playing Havana Cubana, a colourful online slot from Bally Technologies which is a conversion from a real life game. Read on to find out more about the directional wild and the free spins.

Havana Cubana is a five reel slot with forty fixed paylines and while there’s no backdrop to the reels as such there is a nice floral wooden carving either side of the title at the top of the screen.

The main symbols are Cuba-related and include dominoes, cigars, maracas, a box of cigars, a bottle of rum, a cocktail (Cuba Libre?) and a girl with a flower in her hair. The four lower symbols are J, Q, K and A.

The girl is also the wild symbol but there’s also a ‘directional wild’ which we will explain below. The free games symbol appears on reels two, three and four, activating the bonus feature.

The compass directional wild symbol appears only on reels two and four but when it does the needle will spin. All symbols in the direction it points will change into wilds and the reels will be evaluated. This can be worth some big wins if a directional wild on reel four points to the left, or two land on the same spin.

You must land three of the free games scatter symbols anywhere on reels two, three and four to trigger this feature. You will only receive five spins but any symbol turned wild by the directional wild will remain in place until the round is over. The spins cannot be re-triggered from within this feature.

The theme is a little bit ho-hum but the directional wild adds an extra edge to proceedings and certainly helps to keep things interesting. The sound effects include some welcome Cuban music which always puts on a smile on one’s face.