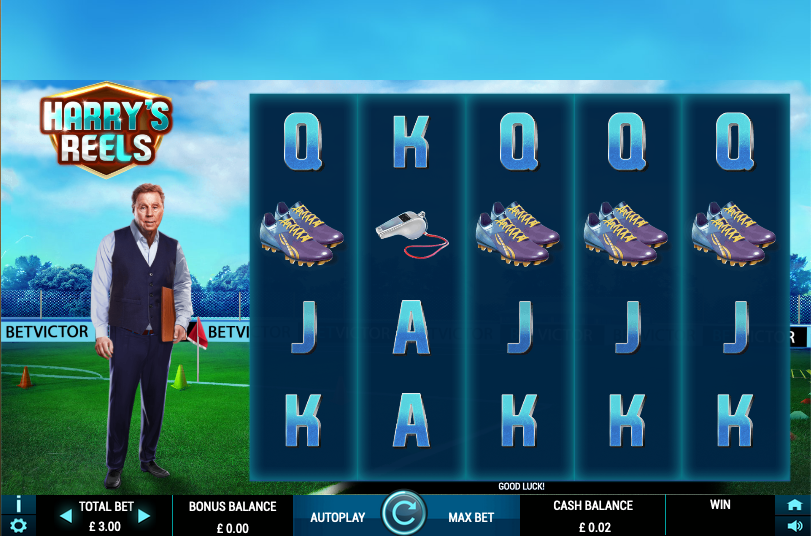 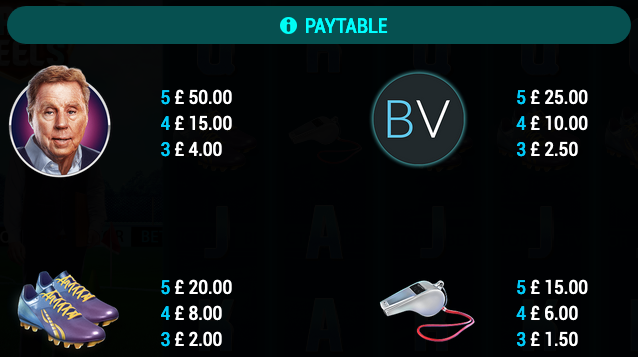 Former manager of many, many football clubs Harry Redknapp is something of a British institution these days but he’s also currently the brand ambassador for Bet Victor and so this online slot from Nektan has been designed exclusively for that casino; it offers players several base game features along with plenty of free spins.

Harry’s Reels is a five reel slot with four rows and thirty fixed paylines; those neat reels float above the artifical grass of a training pitch while our man stands, clipboard in hand, on the left hand side.

High value symbols include Harry, a pair of footie boots, the Bet Victor logo and a referee’s whistle; 10, J, Q, K and A represent the lower values.

The football is wild, it appears on reels two to five and it will replace all other symbols apart from the FA Cup scatter icon to form winning combinations.

The following mini-features can occur at random on any spin:

This is triggered by landing three trophy scatter symbols anywhere on reels one, three and five (or via the Near Miss Respin or Random entry described above) and you’ll get to select from one of the following options:

Four free spins with a coin toss on each spin to collect wild symbols; all those wilds are then added back onto the reels for a final spin.

Trigger this by landing four Harry symbols on reel one – they’ll lock in place while the other reels respin to try and land more Harrys, wilds or wild 2x; respins continue until no more of those symbols land.

‘Wild’ is one word we wouldn’t use to describe Harry Redknapp but this slot flings every possible variety of wild feature at us as well as a choice of two free spins rounds; Harry’s Reels is one of the best exclusive slots we’ve played and it comes highly recommended.