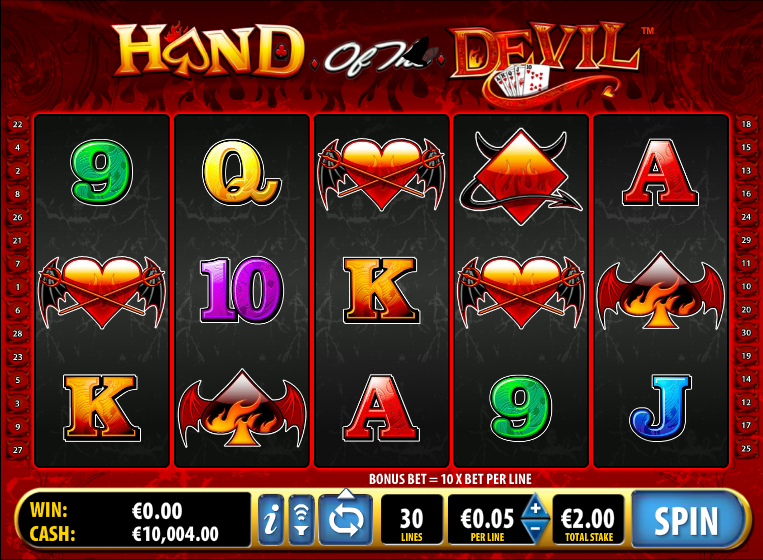 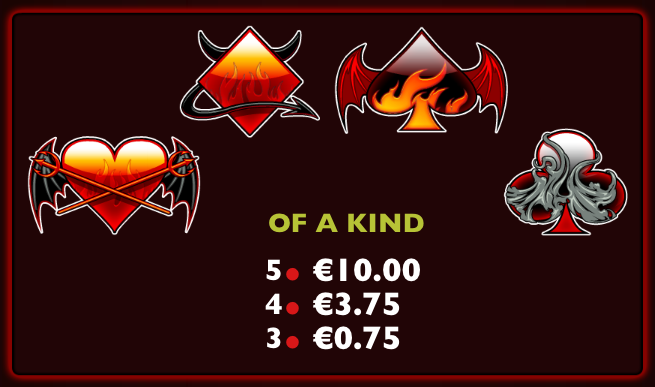 A trip to the underworld awaits those who decide to spin the reels on this online slot from Bally Technologies. It’s called Hand Of The Devil and it’s theme combines a fiery visit to the afterlife with the holy game of poker. It features a free spins round and an extra bet so keep reading to find out more.

Hand Of The Devil plays out over five reels and thirty fixed paylines and it’s all set in a glowing red representation of the place you go if you’ve been a less-than-ideal citizen during your life.

The four main symbols are the four different playing card suits – hearts, diamonds, spades and clubs – but dressed up in devil-related accessories such as horns, wings and tridents. 9, 10, J, Q, K and A are the lower value icons.

The wild symbol is a big fiery ‘wild’ which can appear stacked on the reels and the scatter is represented by the ‘Hand Of The Devil’ logo which activates the feature.

This is a feature Bally use in several of their games and it’s a sort of forced bet which increases your wager. The idea is that you are ‘buying’ access to the extra features and it will cost you 10x the line bet.

Landing three four or five of the scatter symbol will trigger this feature and you reward is ten free spins. Before they start the game will choose one of five sets of playing cards for you. These act as extra wilds appearing only on reels two, three and four and are worth between 1x and 5x depending on the set chosen.

These extra wilds are also stacked on the reels and when they land they will remain in place for the duration of the spins. Check it out in the video above.

Hand Of The Devil is a nice theme which isn’t quite matched by the gameplay. there’s not too much wrong with it but it hasn’t really caught our imagination. Perhaps a little more could have been made of the playing cards within the feature.