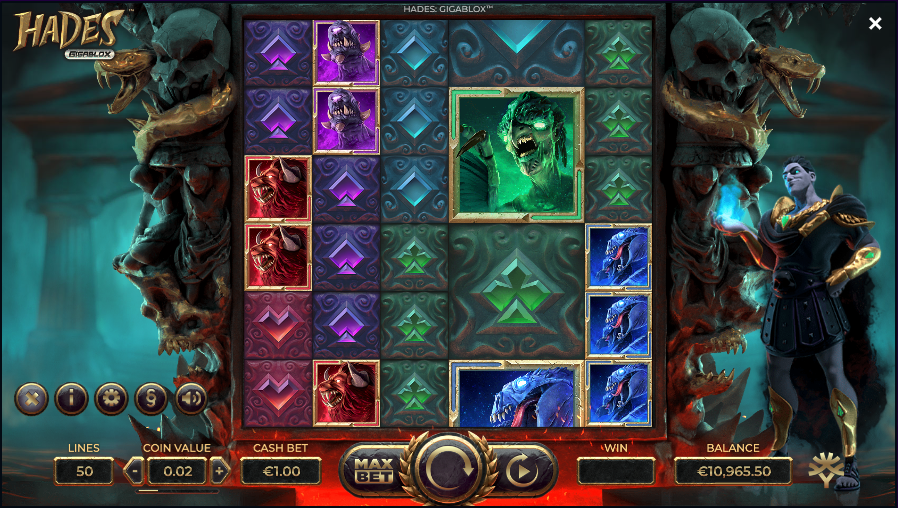 In Greek mythology Hades was the god of the dead and it also became the name of the realm over which he presided; Hades Gigablox is an online slot from Yggdrasil Gaming which descends to those subterranean deaths and from £0.10 per spin players can enjoy giant symbols, free spins and wild fights with monsters.

Hades Gigablox is a six reel slot with six rows and fifty fixed paylines; Hades himself stands to the right of those reels which are surrounded by warped skulls and the ancient skeletons of giant snakes.

Four hideous monsters represent the higher value symbols while playing card symbols in attractive colours make up the lower values; wild monster symbols will replace all standard symbols but they can only be created in the Hades Wild Hunt feature. The Free Spins symbol is the scatter.

Gigablox are giant symbols which can be up to 6×6 positions in size – at least one will land on each spin.

At random Hades may decide to fight one or more of the monster symbols on the reels and if he wins that symbol will turn wild.

Landing at least five of the Free Spins scatter symbols anywhere in view will kick this feature and the number of scatters will equal the number of free spins awarded. Every scatter which lands during this round will award an extra spin.

Hades Wild Hunt will occur on every spin in this feature and the accumulated wins will award the following:

Hades Gigablox is the second slot from Yggdrasil to use the giant blocks feature (after Lucky Neko) and it lives up to the high standards of that game; the template is quite similar but the features are original and exciting, especially when Hades gets involved with his monster hunting.