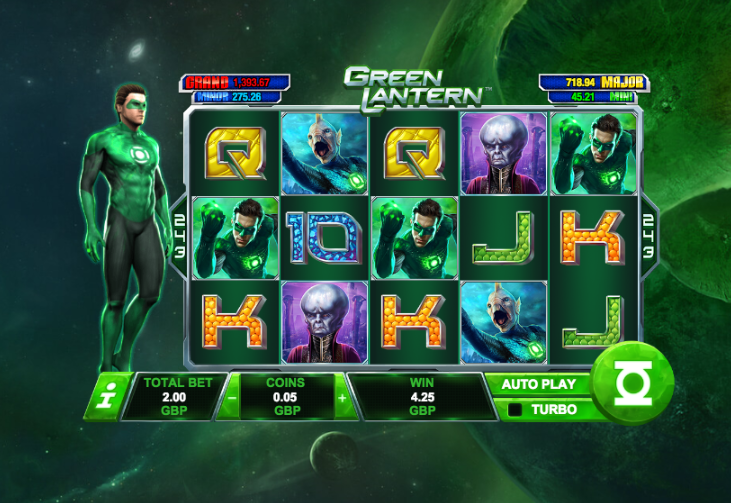 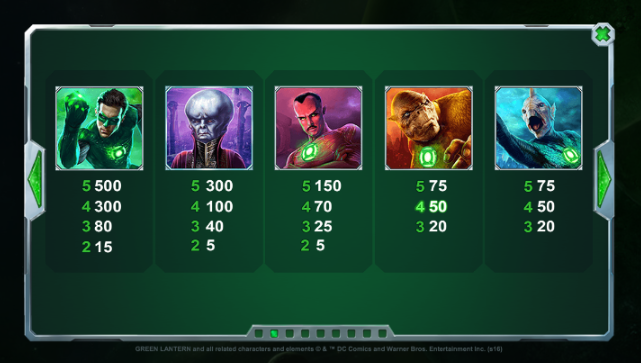 Green Lantern is perhaps one of Marvel’s less popular superheroes but he’s also a fairly old one being created in back in 1940. Playtech have now released a Green Lantern online slot based on this ring-brandishing character and it looks to be an exciting one.

Green Lantern is a five reel slot with three rows and 243 ways to win; the Green Lantern himself stands to the left of the reels, occasionally doing something heroic – the backdrop to those futuristic reels is a huge green-tinged planet floating through space.

High value symbols here include Green Lantern, Sinestro, Hector Hammond and two others we need a little help in identifying; 9, 10, J, Q, K and A make up the lower values.

The famous green ring is wild, appears on reels two, three and four and will substitute for all other symbols to form winning combinations.

Green Lantern uses the collapsing reels feature which means that each winning combo will disappear to be replaced by more symbols falling down from above; more combos can then be created and the process continues in this manner.

There’s an extra aspect to this feature in Green Lantern because each successive winning combo will light up the Power bar in the bottom right hand corner. Reaching at least the fourth segment will randomly trigger one of the bonus features but more segments mean potentially better prizes:

Entry to the jackpot game can be won on any spin but there’s a better chance of you play with a higher stake; pick from the grid on display to find colours which fill up the Grand, Major, Minor or Mini prize meters.

We always like a collapsing reels/rolling reels feature so Green Lantern already gets a head start in the superhero slot stakes; it’s graphics and animations are highly detailed and it comes with an RTP of 95.94%.