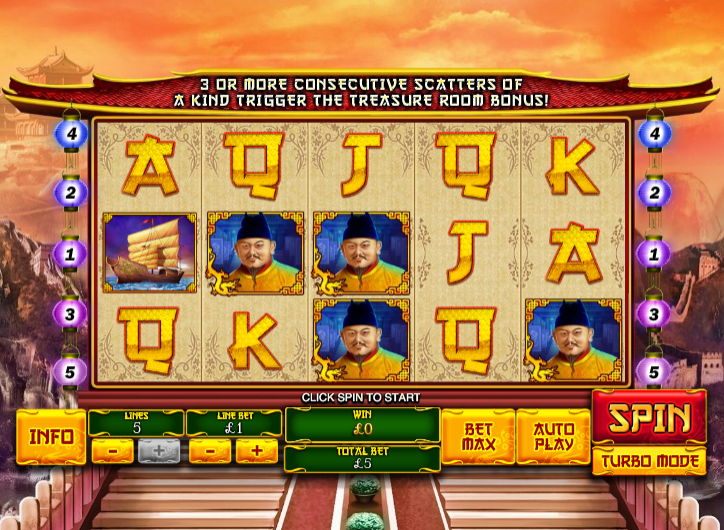 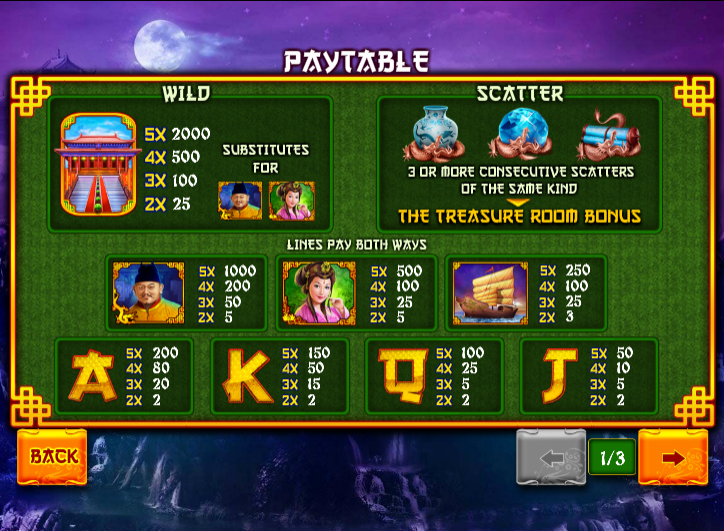 The Ming dynasty ruled China for some three hundred years from the middle of the fourteenth century until the middle of the seventeenth century before ultimately giving way to the Qing dynasty. This online slot from Playtech is called the Great Ming Empire and it celebrates the three centuries of rule with some oriental music and the Treasure Room bonus – read on to find out more.

The Great Ming Empire is a five reel slot with three rows and just five paylines; those reels spin on the sides of a traditional temple building and in the background there’s mountains and the Great Wall stretching away into the distance.

There are three high value symbols including the Emperor himself, his consort and a Chinese junk floating on a calm sea; lower values are represented by the standard J, Q, K and A.

The wild is represented by a view of the steps leading up to the Emperor’s palace but this symbols substitutes only for the Emperor and his consort. There are three scatter symbols – a case, scrolls and a large jewel – and they all point to the same feature.

This is triggered by landing three or more of one of the scatter symbols anywhere on consecutive reels and you will get to play a picking game.

You are now taken to a room displaying eight items of treasure and all you have to do is pick three to reveal cash prizes; these prizes are proportional to your bet and additionally, if the round is triggered by four or five scatter symbols, there’s a respective multiplier of your prizes of 3x or 20x.

The Great Ming Empire adds to a growing line of oriental Playtech slots and although this may not be the best, it’s perfectly fine for a few spins. Check it out at your leisure, it has an RTP of 96.15%.