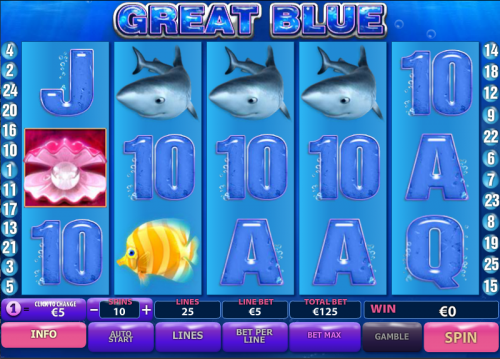 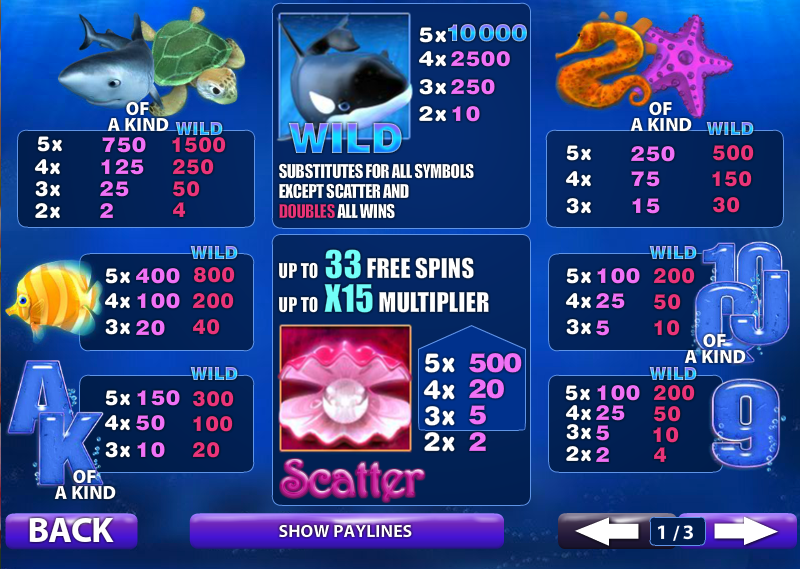 An online slot based on the world of nature is always a winner for us and Great Blue by Playtech is just that; it concentrates exclusively on life below the ocean waves and everything about the slot looks aquatic.  Bubbles constantly rise around the reels and you can just see sunlight breaking the surface behind the Great Blue logo.

This game features five reels and twenty five paylines and even if the low value symbols are just playing cards, those cards bubble away as the reels spin.  The higher value symbols are a range of underwater creatures including a starfish, a seahorse, a stripy yellow tropical fish, a turtle and a shark.

Special symbols are a blue whale wild and a pearl within a pink shell which activates the bonus game.

This is the main bonus feature in this game and it can be a really lucrative one; you can trigger it by landing three or more of the pearl scatter symbols anywhere on the reels.  This kicks off the round and you’ll get eight free spins but that’s not all; the first step is to pick two out of the five shells on the screen in front of you for which you’ll be rewarded with up to 33 free spins and a 15x multiplier.  You can now start the free spins.

More spins can be won during this round by landing three more of the scatter symbols and this can occur indefinitely.

For the gamblers amongst us (and let’s face it, most of us are) there’s a handy opportunity to gamble your last win – just click the ‘Gamble’ button at the bottom of the screen and then pick either red or black to double your money.  As soon as you are incorrect you lose your money and the round is over.

The blue whale wild is a stacked wild which means one, two or three wilds can appear directly on top of each other; in this manner they can cover an entire reel meaning that it’s easier to create winning combinations.  If it’s involved in a winning combo it will also mean a 2x multiplier.

This is nice simple game with some great graphics and animations; we should add a mention for the cheerful soundtrack which isn’t particularly aquatic but that doesn’t really matter.