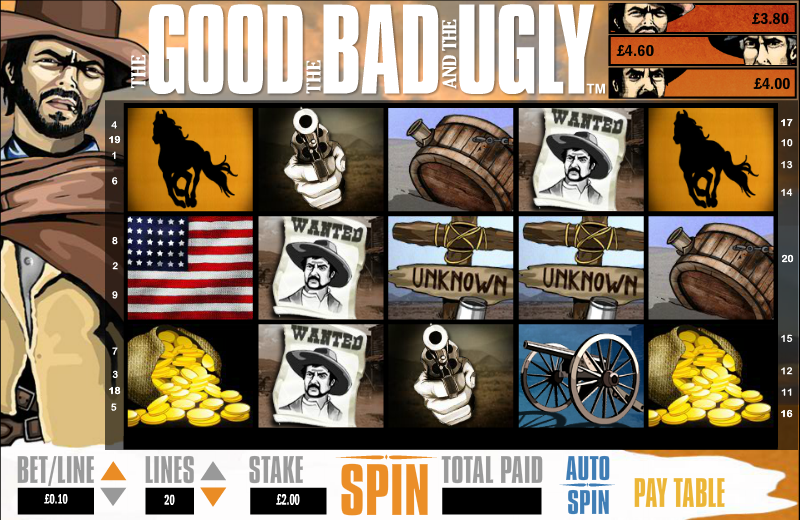 If anyone out there is unaware of this legendary spaghetti western movie than they should immediately hang their heads in shame – then they should track the film down and enjoy it in it’s full glory. This smooth-looking online slot is obviously based on that iconic Clint Eastwood epic and it’s developed by Fremantle, a developer with plenty of experience bringing television shows and movies to the spinning reels.

The Good, The Bad And The Ugly is a five reel slot with twenty paylines and the design of the game is instantly familiar to fans of films from this era and especially this genre. The title is in big, bold characters above the reels will Clint himself stands menacingly on the left hand side.

All the symbols are theme-related and so we have a discarded water flask, a machine gun, a grave, a pistol, a wanted poster, a Confederate flag, a US flag and a bag of gold coins.

The silhouetted horse is wild and the crossed pistols is the bonus symbols which activates the feature. There are also three separate ‘face’ symbols which help to increase the jackpot amounts above the reels.

If you can land those crossed pistols anywhere on reels one and five you will trigger this mini-game. You will be presented with five cut-out targets and you will get three shots with your pistol to take out three of the targets. Each one will be worth a multiplier amount which will be totalled and applied to your win when the shooting is over.

We’ve already mentioned those three boxes to the top right of the reels; each time one of the matching faces lands on the reels the associated total in the box will increase. The way to win these totals is to land the Good, Bad and Ugly symbols on reels three, four and five respectively.

What a great game! The graphics and animations are excellent and the sound effects and original music are spot on. The main feature could perhaps be a little longer but that’s a minor gripe.