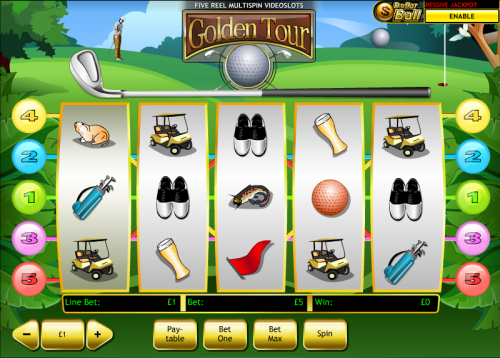 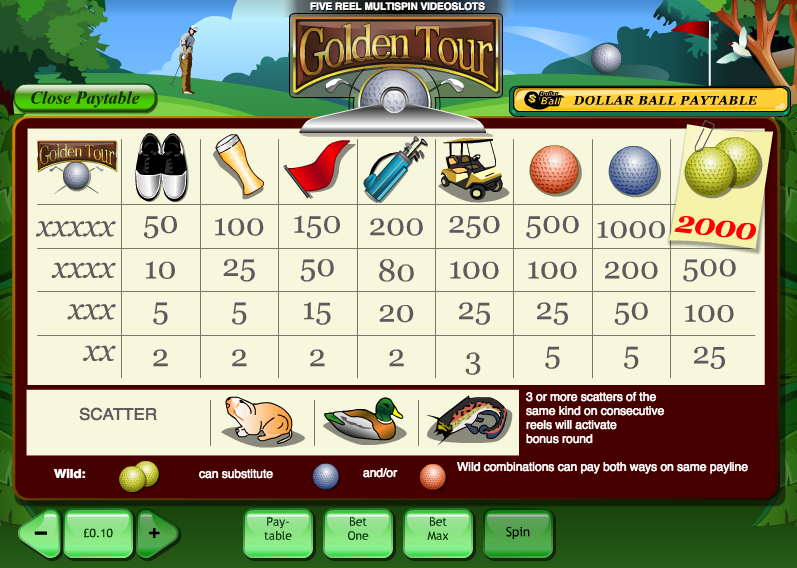 There’s always room in our schedule to check out a slot machine based on sport; of course whether golf could be described as a sport is another question altogether but Golden Tour is a nicely put together tribute to that most sedate of pastimes.

Golden Tour is not one of Playtech‘s newest slots and the graphics give away the fact that it’s been around for a little while now but don’t let that put you off.  There are five reels and five possible paylines all set against the background of a sunny golf course.  The Golden Tour logo itself is reminiscent of the logos of the big major tournaments.

The symbols are all golf-related and from low to high value they are golf shoes, a celebratory drink, a hole flag, a set of clubs in a golf bag, a caddy, a pink ball, a blue ball and two yellow balls.  Those high value yellow balls are also the wild symbols and there are also three different scatter symbols – a gopher, a duck and a fish.

Golden Tour features quite a nice bonus game which is triggered by landing three of the animal-related scatter symbols on consecutive reels.  The player is then transported to a section where club selection is a requirement – first choose a driver, then an iron and finally a putter and watch the resulting shot towards the hole.  You’ll win a cash prize based on your choice of clubs.

Golden Tour also features Playtech’s Dollar Ball progressive jackpot which you need to enable and pay for if you’d like a chance at a major cash prize.

Golden Tour is an entertaining and fast-moving game; the relatively low number of symbols means you land lots of low value wins and the bonus game is an interesting diversion.  Choose to play with just one payline and you can wager as little as £0.01, a maximum bet of £5.00 per payline on all five lines will cost you £25.00.