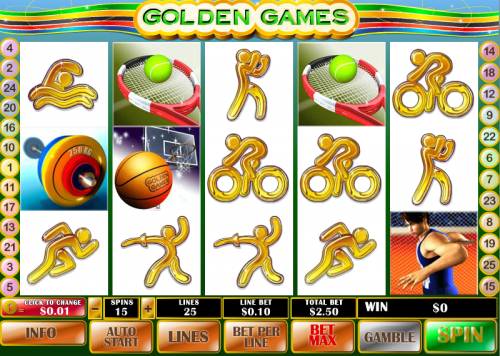 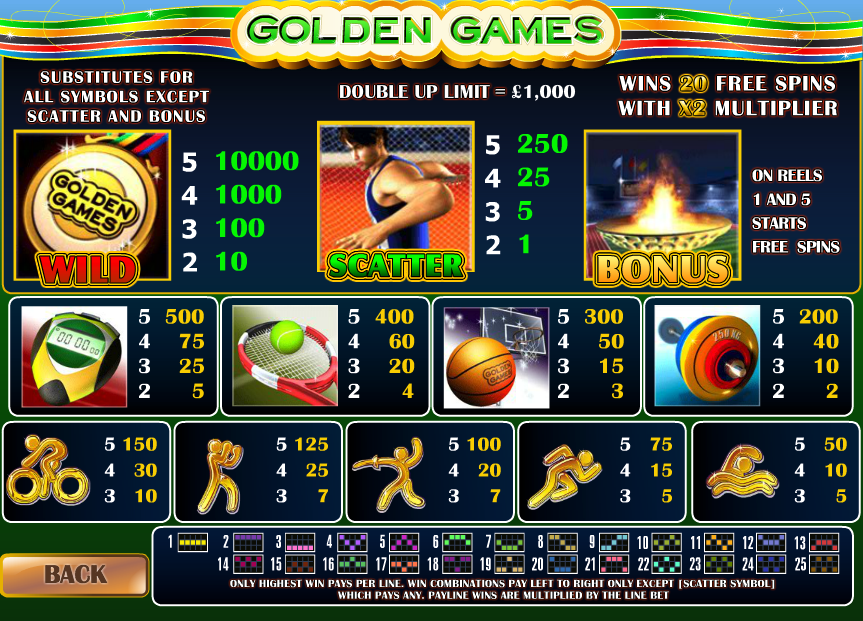 You probably can’t get much further away from taking part in proper sport than spinning the reels on your laptop or smartphone with the possible exception of lying down while doing the above.  Golden Games from Playtech is an online slot machine which brings the sport to you so all you need to exercise is one finger or perhaps the hand which uses the mouse.

Golden Games suggests a sporting competition not unlike the Olympic games; it’s a five reel and twenty five payline slot which showcases a number of different sports.  The lower value symbols are represented by golden figures, each taking part in one sport and so we have a swimmer, a sprinter, a fencer, a boxer and a cyclist.

Higher value symbols include barbells, a basket ball and hoop, a tennis racket and ball and  stopwatch.  All the sporting accessories are featured here and in addition we have a gold medal wild, a discus thrower scatter and what can only be described as an Olympic flame bonus symbol. 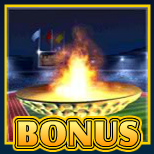 The main bonus feature in Golden Games is a free spins round and it’s well worth winning; all you need to do is land the flame bonus symbol on reels one and five in the standard game and you’ll be rewarded with twenty free spins.

Within this feature any prize you win will be subject to a 2x multiplier and the extra bit of good news is that landing the flame symbol on reels one and five again will get you another twenty spins.

For those who like a gamble, the ‘Gamble’ button underneath the reels is the gateway to an opportunity to double your most recent winnings.

Golden Games is a crisp-looking and fast moving game which should appeal to sports fans and slots fans alike; the background music is slightly reminiscent of a 1990s video game but don’t let that put you off.  This is a fun game with a generous free spins round.