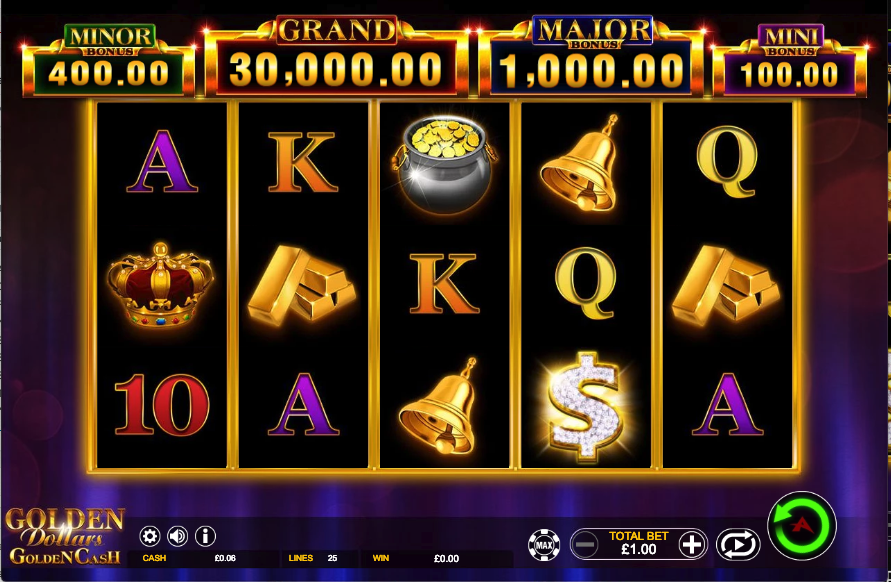 Cauldrons of coins and stacks of gold bars suggest the sort of luxurious lifestyle we could lead if only that progressive jackpot would look kindly on us for a moment; well perhaps it will now because Golden Dollars from Ainsworth Gaming comes with a jackpot prize along with plenty of free spins.

Golden Dollars is a five reel slot with three rows and twenty five fixed paylines; everything is gold here including the borders around those reels and the prizes at the top of the screen.

The high value symbols include a crown, a pot of gold coins, a pile of gold bars, a golden bell and some dice; 9, 10, J, Q, K and A make up the lower values.

The diamond studded dollar sign is wild and it will substitute for all others to help form winning matches except for the ‘Free Games’ and diamond scatter symbols.

This is triggered by landing at least six diamonds anywhere in view and you’ll receive three free spins with those diamonds held in place; any new diamonds landing will also lock and reset the spins to three again. When there are no spins remaining all diamonds will reveal a multiplier value up to 50x which will be applied to your total stake. If the reels are full of diamonds the Grand Prize (above the reels) is won.

This is triggered randomly and a large diamond will cover reels two, three and four and three free spins are awarded; the rest of the round plays out in the same way as the Golden Cash feature.

Trigger this by landing at least three of the Free Games symbols anywhere in view – you’ll receive an initial eight free spins with one extra awarded for each Free Game symbol landing during this round.

Extra wilds are used in this round in the form of gold coins with multipliers of 1x, 2x or 3x attached along with large symbols which cover reels two, three and four. Any gold coin appearing will also award either the Mini, Minor or Major bonus prizes.

Fans of Ainsworth slots will appreciate the clean lines and fast-moving action of Golden Dollars and in fact everyone should enjoy the variety of bonus features available here – give it a go!