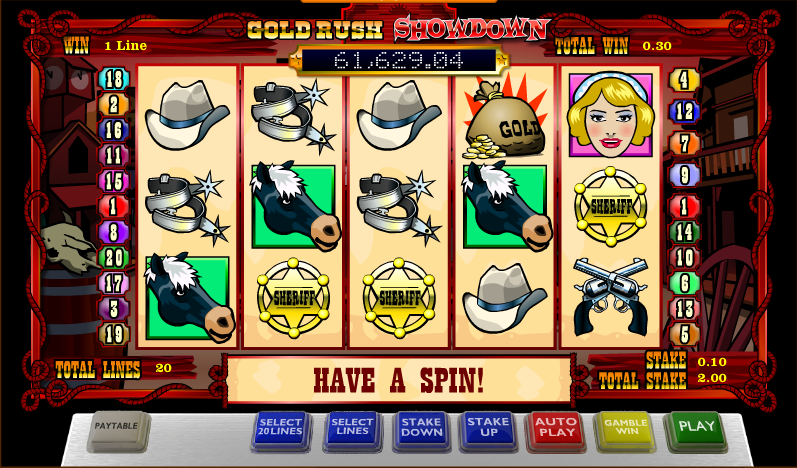 We like a Wild West themed online slot as much as the next person and that’s exactly what we’ve got here with Gold Rush Showdown from Amaya Gaming.  It’s humorous, fast-moving, features several bonus games and a progressive jackpot; it’s also worth sitting through the intro movie the first time you load up this slot.

It’s fair to say that Gold Rush Showdown is not at the bleeding edge when it comes to sophisticated graphics but that’s no problem with a game as much fun as this; it features five reels, twenty paylines and a host of cheerful symbols which include a cowboy hat, spurs, a pair of pistols, a sheriff’s badge, a bag of gold, Handsome Hos and Lucky Lucy.

There’s lots of bonus symbols which perform various different functions throughout this game and these include a host of characters – Billy the Quid, Big Bad Bull, Prospector Pete, El Bandito and the Bandit King.  The Bull is wild and Pete is the scatter symbol.

If you’ve played Gin Joint Jackpot (and we recommend it) you may recognise the style of bonus games here; there are several as follows:

To trigger this feature you’ll need to land Billy the Quid on reel one and any of the bandit-type characters to his right.  The next stage is a shooting game where you can manually try to shoot as many bandits as you can or select the ‘auto fire’ option to have the game do it for you.

After this the looming shadow of the Bandit King will appear and you will gun him down mercilessly, collecting all the loot he drops.  If he drops three diamonds you will win the progressive jackpot.

This feature is activated by landing between one and four banditos on the reels; there’ll be a shootout and you’ll receive a cash prize for each baddie despatched.  The more banditos shot, the higher the prize per bandito.

If you’d like to win the progressive jackpot (and who wouldn’t) it’s best to increase your stake – the more you bet the greater chance you’ll have of grabbing the big bucks.

To maximise your playing fun, choose to shoot manually when you trigger the Cowboy vs Bandits feature; the outcome will be largely the same but it will be all you own work.

It may be a simple-looking game but it’s loads of fun and well worth a few minutes of your time; there are bonus features a-plenty and a lucrative potential progressive jackpot for the luckiest players.