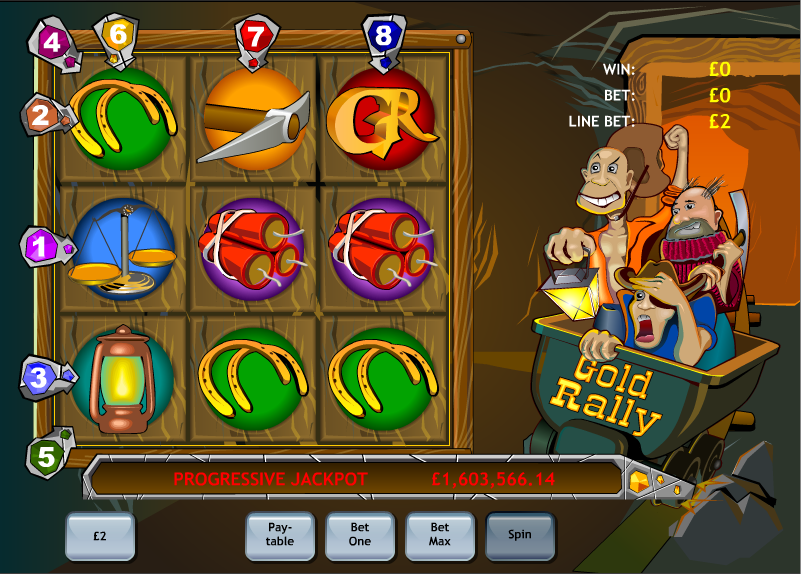 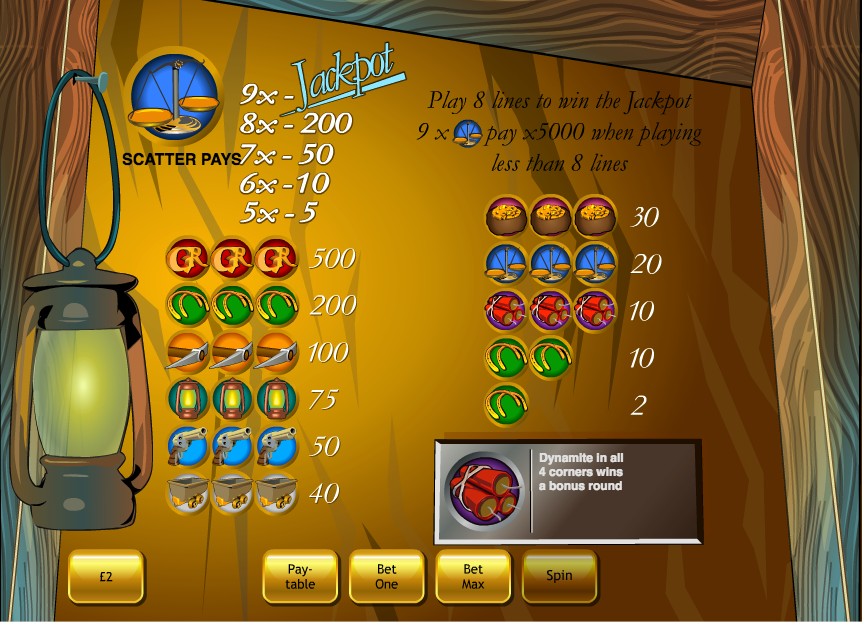 Mining seems to be a fairly regular theme of online slots and that’s the car here with Gold Rally from Playtech.  Being a humourous game though this is gold mine where health and safety rules are disregarded with a wanton recklessness that borders on the fatalistic.

The characters who dig for gold in these particular tunnels jump in rail carts to race along the tracks cheering and waving pickaxes and we imagine that their average lifespan must be somewhat shorter than the average.

On to the slot though and this is a three reel game with eight paylines – the reels are set in a wooden frame on the left of the screen and our out-of-control miners are emerging from a glowing tunnel on the right hand side.  The paylines are quite imaginative and as you can see from the screenshot above it’s possible to make winning combination vertically and diagonally as well as horizontally.

The symbols are a collection of pictures all related to gold mining or the Old West and so from low to high value we have horseshoes, dynamite, weighing scales, a bag of gold, the rail cart, a revolver, a lantern, a pickaxe and ‘GR’, the Gold Rally logo.

You can pick the number of paylines to play by selecting directly from the numbers next to the reels or using the ‘Bet One’ or ‘Bet Max’ buttons at the bottom.  You can only win on an active payline unless you land the scatter symbols which will entitle you to a win as long as at least five are on the reels.

The scales scatter symbol is also where you can win the huge progressive jackpot and you need nine which means that every symbol on the reels will be a pair of weighing scales – hard but not impossible.

If you can land a dynamite symbol in all four corners of the reels you’ll play a short bonus game where you must choose items to explode until you hit a winner.

Gold Rally is a simple slot with a few added extras that should appeal to fans of basic three reel slots as well as those who enjoy the occasional bonus feature.  Of course the progressive jackpot will also be a big draw for many.