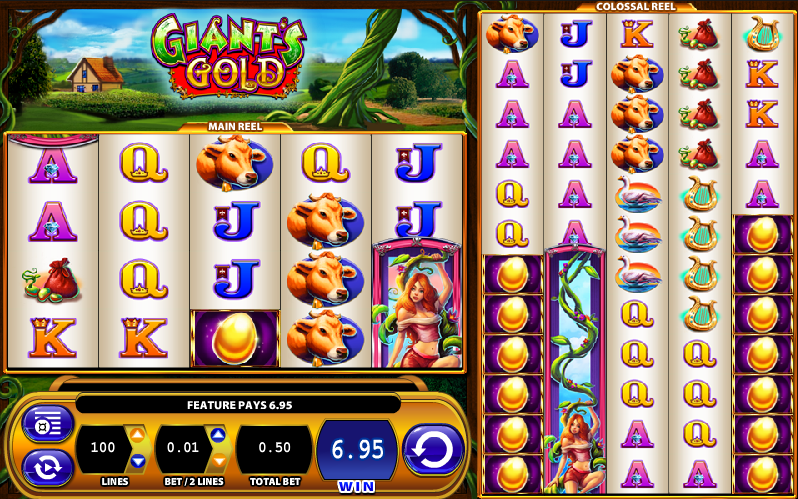 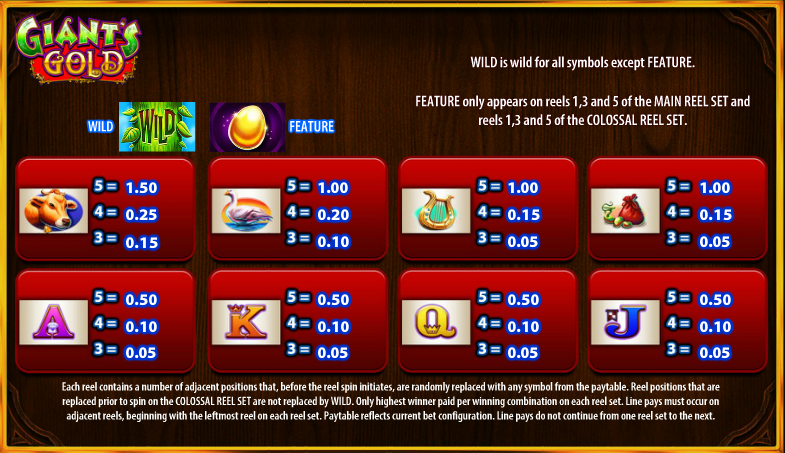 Children’s stories always make interesting themes for online slots machines; the developers can take advantage of the adventure, the fantasy and of course the tale which has already been written for them. Giants Gold from WMS Gaming is based on the story of Jack and the Beanstalk but in this case Jack has been replaced by a scantily clad young lady who is making her way up the stalk into the clouds.

Both sets of reels use the same symbols, all of which can appear stacked which means they will appear on top of one another. Those symbols include items mentioned in the original story such as food, a golden harp, a goose and a cow.

The beanstalk itself is the wild symbol and of course the golden egg will activate the bonus feature for you. If the wild symbol covers all places on a reel on the left hand side, it will make the corresponding reel wild on the colossal reel.

The golden egg is the key to the free spins and it only appears on reels one , three and five on both reels.  You only need to land three eggs in total to trigger the spins and that will earn you an initial five spins.  However because the symbols are stacked it’s easy land many more eggs and each additional one will give you one more spin; forty or more will earn you 100 free goes.

More spins can be won while you are playing the feature and all wins are multiplied by 2x.

You don’t need to play every single payline but you’ll get more enjoyment and action from this game if you do. Keep the sound on to hear someone on the background singing Fee Fi Fo Fum!

These double reel games always offer something a bit different and even if you don’t win any more money, there’s lots of action to make up for it. Well worth a go.