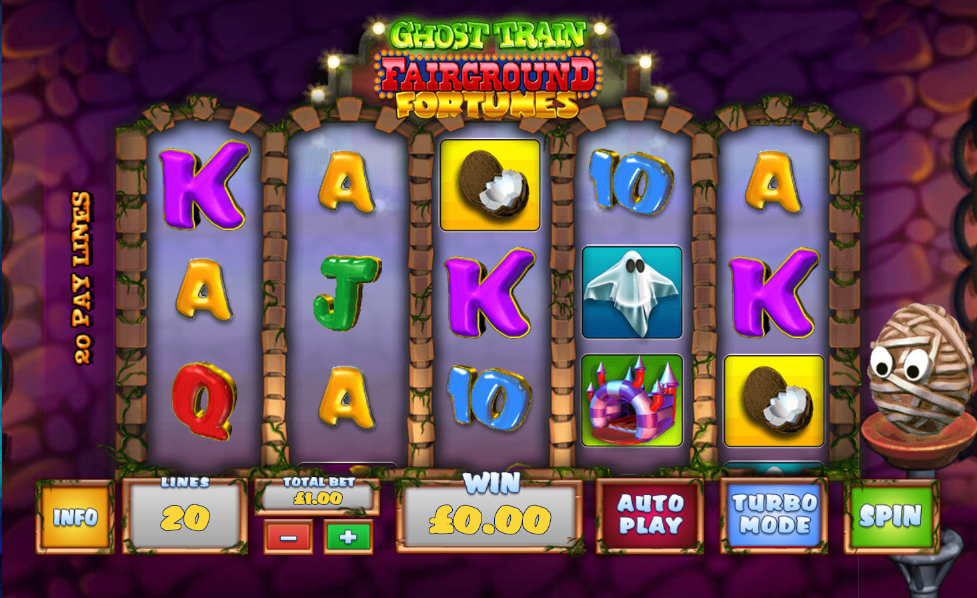 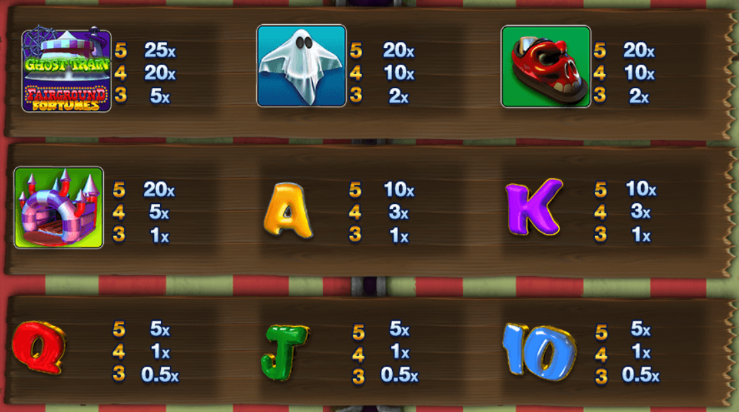 One of the attractions of a traditional fairground is the ghost train in which you sit on a rattly mechanical cart and are propelled through a cheaply built structure while various ‘scares’ are thrust in your direction; this online slot from Playtech is based on that experience and it’s called Ghost Train Fairground Fortunes.

Ghost Train Fairground Fortunes is a five reel slot with three rows and twenty fixed paylines; each reel spins within a stone archway while a mummified egg watches over proceedings from the right hand side.

The higher value symbols are various objects familiar from a fairground such as a dodgem car, a bouncy castle, a ghost and then the game’s logo; 10, J, Q, K and A are the lower values.

The wild symbol is a collection of grinning skulls and this will substitute for all others to form winning combos except for the coconut scatter and the two bonus icons – the ghost train and the bat.

This is triggered by landing three of the ghost train bonus symbols anywhere on reels two, three and four; you now get to ride the train with each monster met on the way awarding cash prize. Triggering the round with two ghost trains plus a golden ghost train will award three rides.

When the round ends you’ll get to select a ticket which can award more rides, up to a maximum of five.

Trigger this by landing three of the bat bonus symbols anywhere on reels one, three and five; you’ll now receive ten free spins on a set of reels with fifty paylines and wild symbols which are stacked five positions high. The spins can be retriggered indefinitely.

Ghost Train Fairground Fortunes is perhaps not the most graphically impressive slot we’ve ever seen but it’s cheerful, colourful and comes with two bonus features which were the source of some big wins for us; it has an RTP of 94.06%.