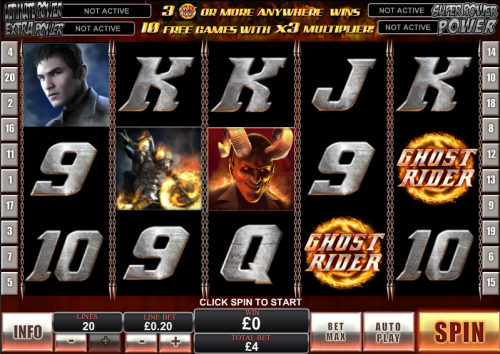 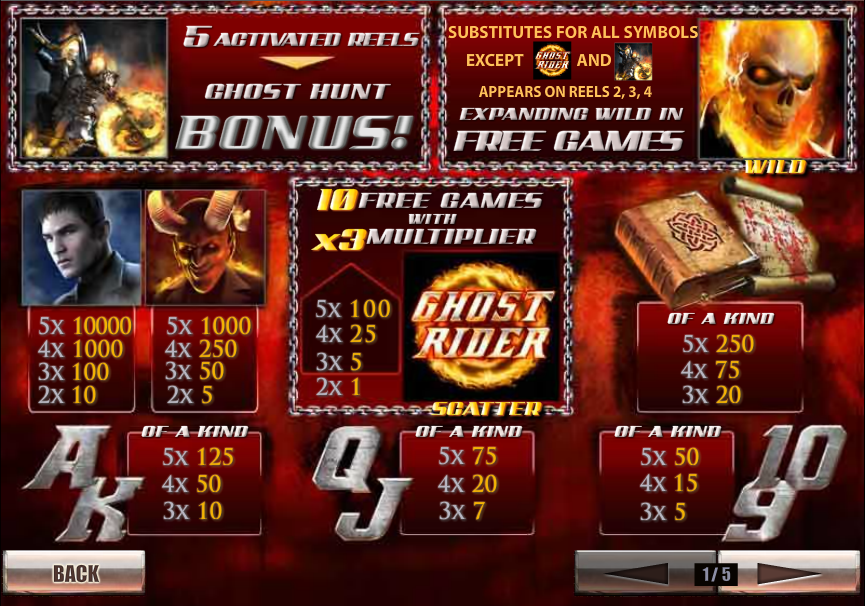 Of all the Marvel superheroes on which online slot machines have been based, it’s probably fair to say that Ghost Rider was one of the weaker films, if not one of the weaker games.  Ghost Rider stars Nicolas Cage as Johnny Blaze and tells the story of a motorcycle stunt rider given demonic powers by the devil in return for defeating Blackheart and his gang of fallen angels.

This Playtech slot looks great and it’s a five reel and twenty payline game with plenty of bonus features to keep you amused.  Playtech’s standard playing card symbols are used for the lower value symbols but the higher value ones are all theme-related.  So we have the devil, Johnny Blaze himself, an ancient book and a sacred scroll.  Special symbols are the Ghost Rider logo which is a scatter, a blazing Johnny on his motorbike which is the Ghost Hunt Bonus symbol and the blazing skull which is a wild.

If you can land the Ghost Rider scatter symbol on three or more reels you will trigger ten free spins with a 3x multiplier for your efforts.  The blazing skull wild symbol will expand to cover the reels if you are lucky enough to land it, increasing your winning combo chances.

This is one of those very rare games on an online slot in which you actually have to interact with the game.  Each time you land the blazing motorcycle symbol in the middle of a reel, the outer edge of that reel sets on fire; once all reels are ablaze the Ghost Hunt begins.

In this game you are riding down a highway and you get ten shots to destroy as many ghosts as possible.  The player has to click on the ghost as it flies by and even if you’re useless at this type of thing a minimum of ten destroyed ghosts are guaranteed.  Each ghost is worth a cash prize and a multiplier.

Marvel slots aficionados will already be aware that just playing one of these games makes you eligible for the progressive jackpots available – Power, Extra Power, Super Power and Ultimate Power; the higher your stake the better your chances of randomly hitting the big bucks.