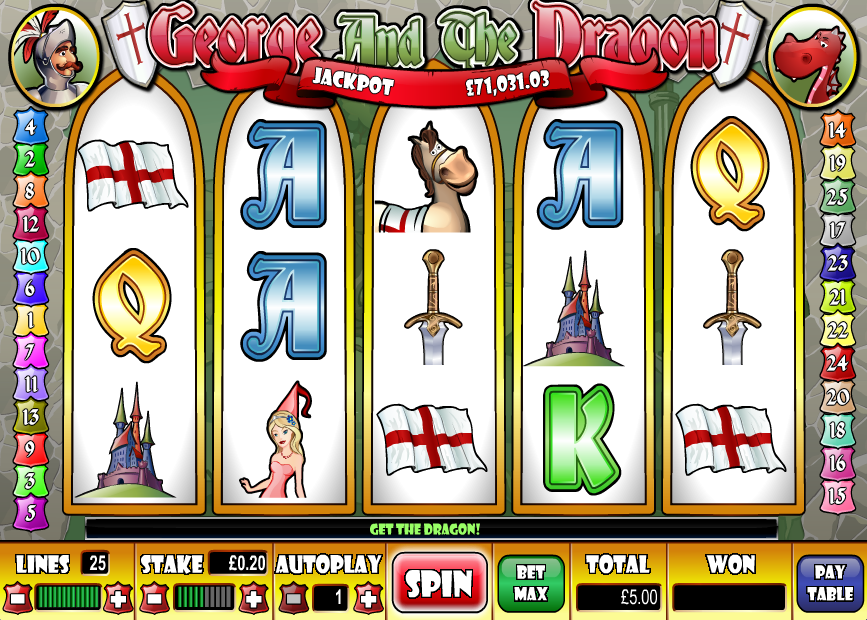 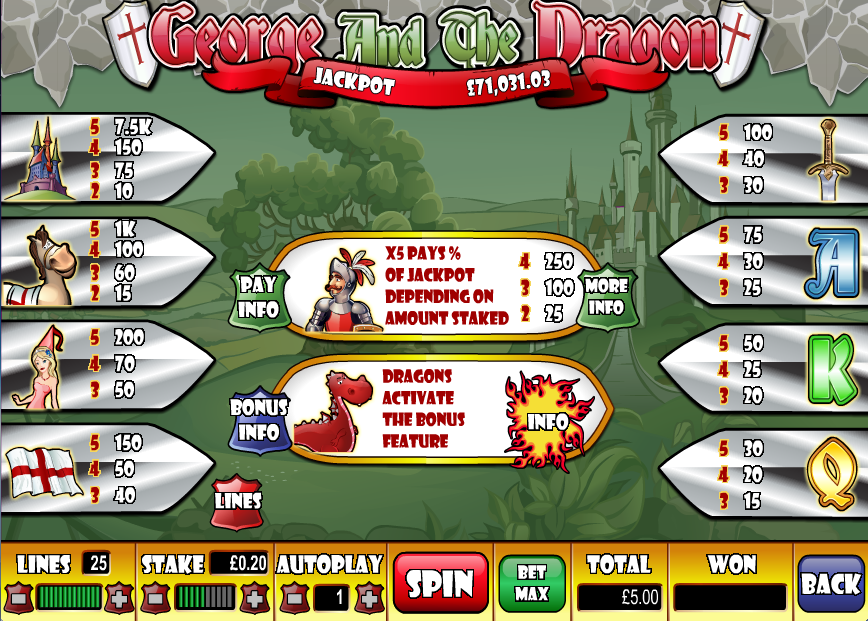 Saint George is one of the world’s most popular saints with many countries and cities claiming him as their own, including of course England; the famous tale of the dragon slaying came back from the Middle East with the Crusaders around 1000 years ago and thankfully there’s now an online slot we can all play which celebrates this slightly mysterious character. It’s developed by Virtue Fusion which is now part of Playtech and it features a progressive jackpot.

George And The Dragon is a five reel slot with three rows and up to twenty five paylines; it’s certainly a simple-looking slot with some very basic graphics and the reels spin in church window-shaped holes against a background of stone walls. George and the dragon watch over the reels from the top left and right hand corners.

The high value symbols include the castle, a horse, a girl, the flag of St George and a sword; Q, K and A make up the lower values.

There’s no wild and no scatter but there are two bonus symbols – George and the dragon – which trigger separate features.

Each time you create a winning combo those symbols will explode and allow more to fall into their places; more wins can then be formed and this process continues until no more wins are landed. It’s similar to the ‘cascading reels’ feature included in various other slots.

Landing the dragon on reels one, three and five will kick off this mini-game and all you have to do is select some tools for George to take on his mission to rescue the princess. The more progress he makes, the bigger the cash prize you will win.

You can see the running jackpot total ticking upwards above the reels and the way to win it is to land five George symbol on an active payline. However the portion of the total prize you receive depends on your stake so low rollers playing at £0.01 per line will only win £0.5% of the total. A £2.00 stake per line wins you 100% of the jackpot and the stakes in-between win gradually increasing percentages.

George And The Dragon has some interesting bonus features and of course the progressive jackpot but it’s graphics leave a little bit of quality to be desired.  We’re not too concerned about the lack of wilds or scatters but we do not know the RTP.