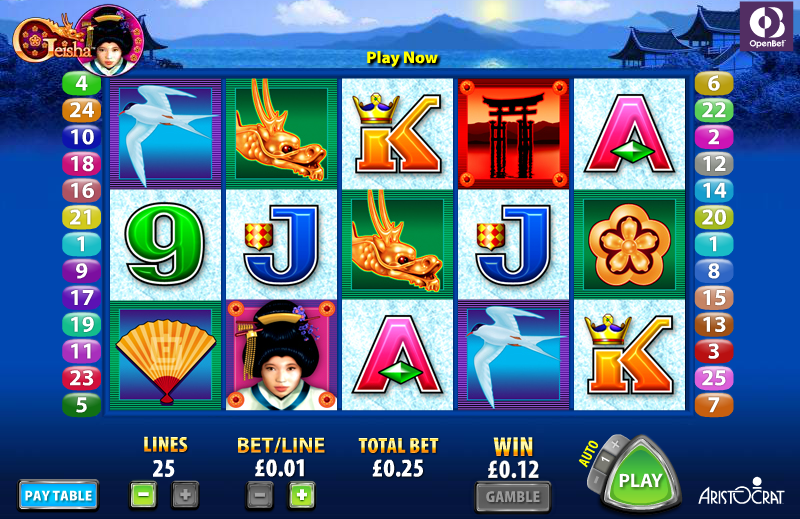 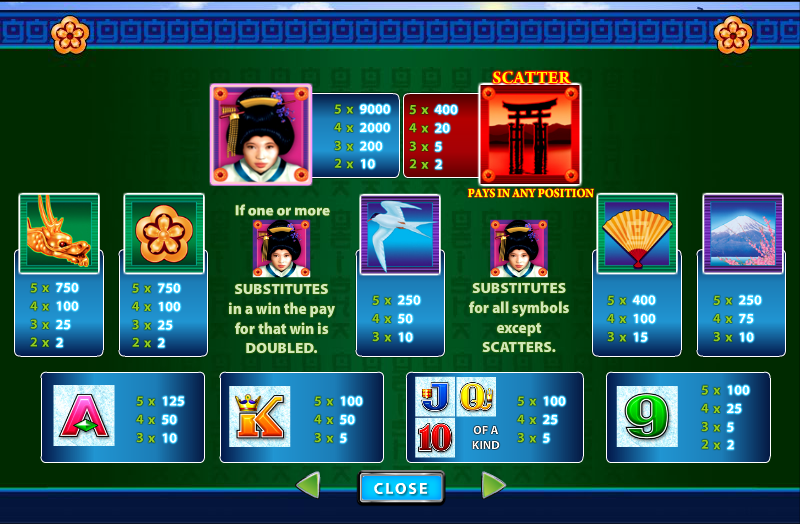 Veteran online slots players are no strangers to the mysteries of the Orient; even if you’ve never left the comfort of your own living room you will have tested out one or more of the many Oriental-themed games available and from this you will obviously have gained a deep understanding of Eastern cultures. Geisha is another to add to this genre, it’s developed by Aristocrat Leisure so read to find to more.

Geisha is a five reel slot with three rows and up to twenty five paylines; the backdrop to those reels is a picturesque scene of a traditional Japanese house overlooking a lake with mountains in the distance. The Geisha herself makes an appearance in the top left hand corner above the reels.

There are five high value symbols which include Mount Fuji, a fan, a seabird, a gold flower and a dragon’s head.

The wild is the Geisha herself and she is worth 9000x the line stake for five on an active payline; she also doubles and wins to which she contributes. The scatter is a reddish symbol featuring a wooden structure in the water.

Fifteen free spins are the order of the day here and to trigger them you will need to land three or more of the aquatic gate scatter symbols anywhere in view. There’s not much more to add except to say that all wins are tripled during this feature and that you can re-trigger it by landing more scatter symbols.

Any win can be gambled by selecting the ‘Gamble’ button below the reels; you can now try to double or quadruple that win by guessing the colour or suit of the next card drawn. You are limited to five correct guesses or a win of £500,000.

Despite the rather basic graphics we like this game quite a lot; the music is understated and appropriate and there’s some nice animations when you hit winning combos. The RTP of 94.88% is just about passable.