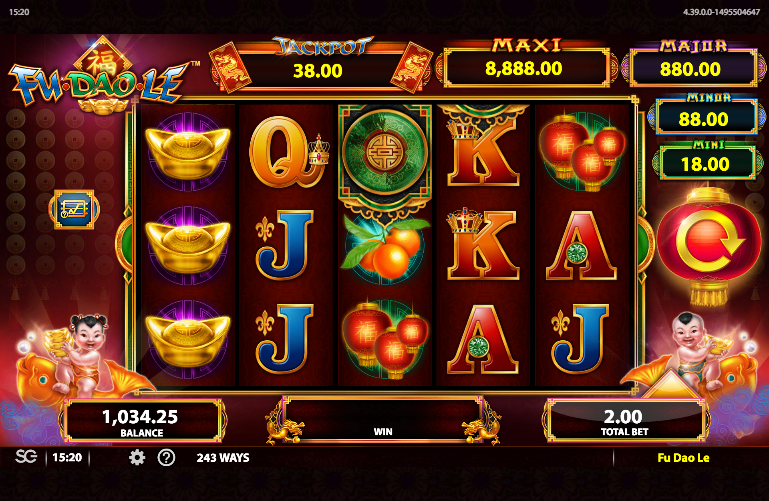 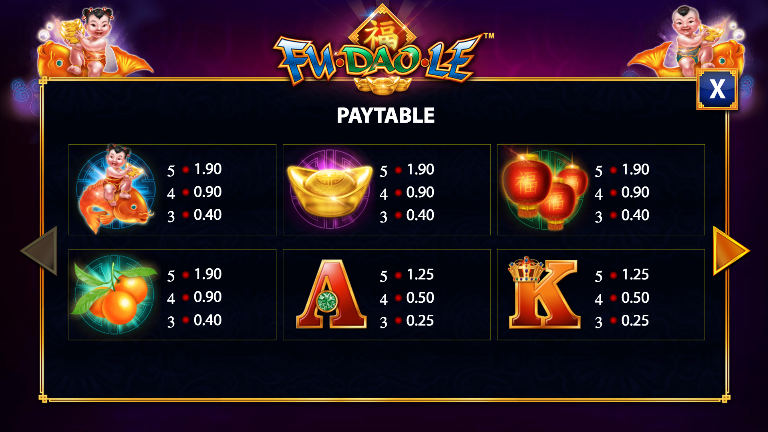 Once more the attraction of a virtual trip to the mysterious orient has proved too strong and so we are checking out this action-packed online slot from Bally; it’s called Fu Dao Le, it comes with several bonus features and you can find out all about it here.

Fu Dao Le is a five reel slot with three rows and 243 ways to win which means that winning combos don’t need to be on specified paylines, they just need to be on adjacent reels starting from the left hand side.

The higher value symbols are related to the theme and include a baby on a Koi carp, a gold ingot, some Chinese lanterns and some oranges; lower values are represented by 9, 10, J, Q, K and A.

There are various wild symbols active in this game:

All the above symbols will substitute for standard symbols but not each other to form winning combos. The first three wilds only appear in the free spins round.

On each spin there are stacked gold symbols which may land; they will transform into matching standard and wild symbols if they do, hopefully helping out with a win.

There are two ways to get your mitts on the progressive jackpot amounts shown above the reels:

Trigger this by landing three of the Wonus scatter symbols anywhere on reels two, three and four; you will now receive eight free spins but a Wonus on reel five will award one more each time. The wilds only appear in this round and the multiplier wilds only appear on reel three.

Fu Dao Le is colourful, full of action and well worth checking out; something happens (or almost happens) on every spin, we experienced several big wins and of course there’s the progressive jackpot to aim for.