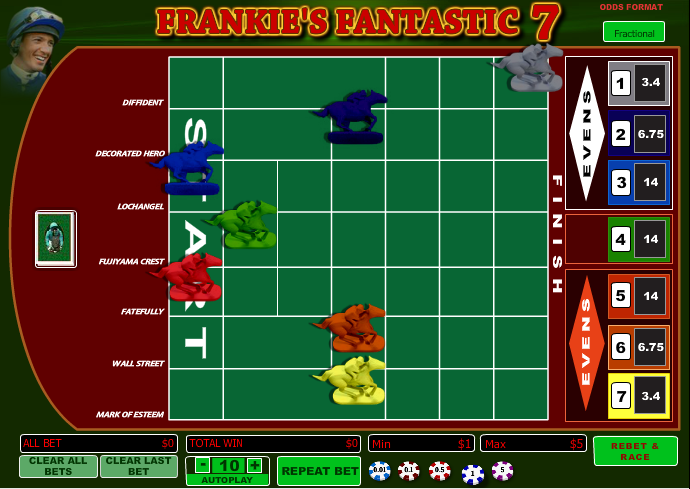 Not many jockeys get their own dedicated game but Frankie Dettori has gone one better. You can play the classic Frankie Dettori’s Magic Seven and now you can check out this admittedly different game called Frankie’s Fantastic 7. It’s a bit of cross between a board game and roulette but it also involves playing cards – read on to find out what it’s all about.

Load up this game and the first thing you will see is a green grid with seven horses on a start line to the left and your betting options to the right. Look out for the pack of cards lying face down on the far left.

Essentially this is a race to see which of those plastic horses reaches the finish line first; if you have bet on the correct horse/options then you will be a winner.

The horses are moved across the grid according to the playing cards; one card is dealt out next to each horse and the highest value will move the corresponding nag one place down the course. If two horses have an equally high card the winner is decided by the strength of the suit in the following order – spades, hearts, diamonds and clubs.

At any time your horse may also draw a joker which will mean it falls and is no longer in contention.

The betting is reasonably simple but you will notice that only the centre three runners have similar odds – the outer four have shorter odds. This is because their course is essentially shorter; have a look at Diffident’s track and you will see that the first move for that horse equals three moves for Lochangel, Fujiyama Crest and Fatefully and so it has an advantage from the beginning.

It’s also possible to get an ‘evens’ bet on the top three or bottom three horses but the return you get is not quite ‘evens’. For example a winning bet of £1 will return a profit of £0.95.

This is game to play for fun rather than a serious attempt to win any money as the rather low RTP of 91.34% – 92.18% will testify. It is enjoyable though especially hoping that your horse doesn’t fall over as you approach the finish line in first place.