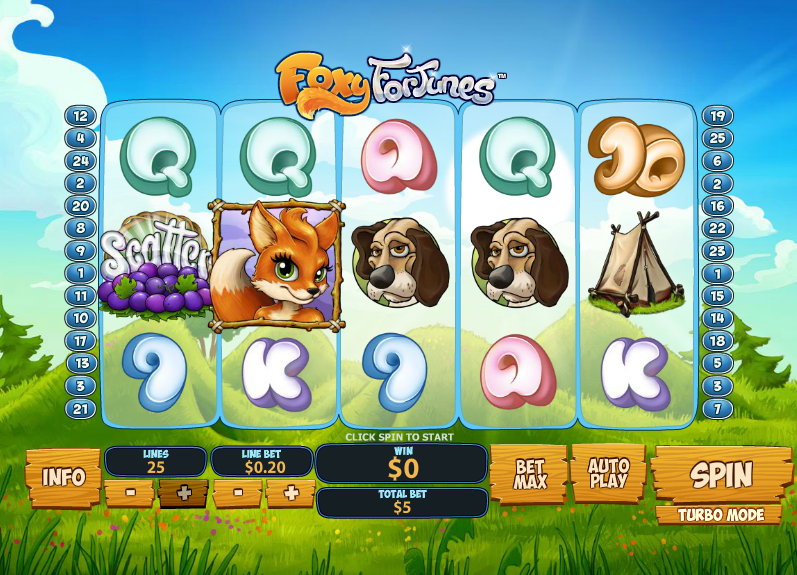 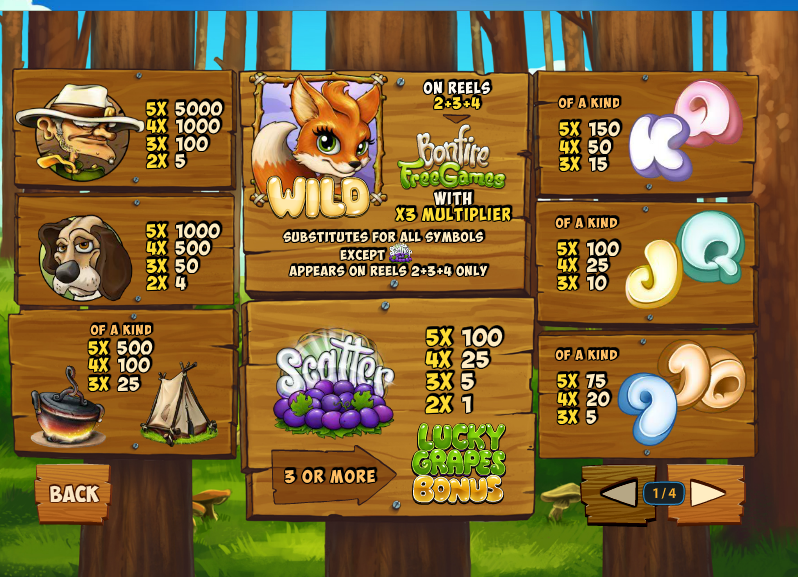 Originally known as Foxy Fortunes, this is a gentle, rural-themed online slot with an atmosphere so relaxing you’ll be snoozing in front of the screen before you know it. It’s called Foxy Fortunes and it follows the laid back antics of the title character, the camper and his hound as they enjoy a warm summer day.

Fortunes Of The Fox is a five reel slot with three rows and up to twenty five paylines and the background to those reels is a green and hilly meadow under a blue sky through which travel wispy clouds. Twinkly music accompanies your gameplay and the reels fall into place with a satisfying click.

The main symbols are theme-related and include a rickety-looking tent, a cooking pot on the fire, the hound dog and the grizzled-looking camper. 9, 10, J, Q, K and A represent the lower values.

The Foxy Fox is the wild symbol and appears only on reels two, three and four; she also activates one of the features. The bunch of grapes is the scatter symbols which triggers a second feature.

So not only is the fox wild, she will also trigger the free spins if you can land three of her anywhere on reels two, three and four. The game tells you that “Foxy and Hound are taking some time out of the chase to relax by the bonfire” and you will win fifteen free games.

All wins will be multiplied by 3x during this round and you can win more free spins indefinitely by landing three more foxes on those centre reels.

This is triggered by landing three or more of the bunch of grapes scatter symbols anywhere in view. Foxy is using a trampoline to grab bunches of grapes from the vine so just choose one for her to pick for a cash prize. Keep picking until she gets caught up in the trampoline at which point the round is over.

Fortunes of the Fox is a fairly basic but good-looking slot which is certainly engaging to play; it can be a little tricky to trigger those features but the free spins especially seem to be a big winner.  RTP is a reasonable 95.11%.