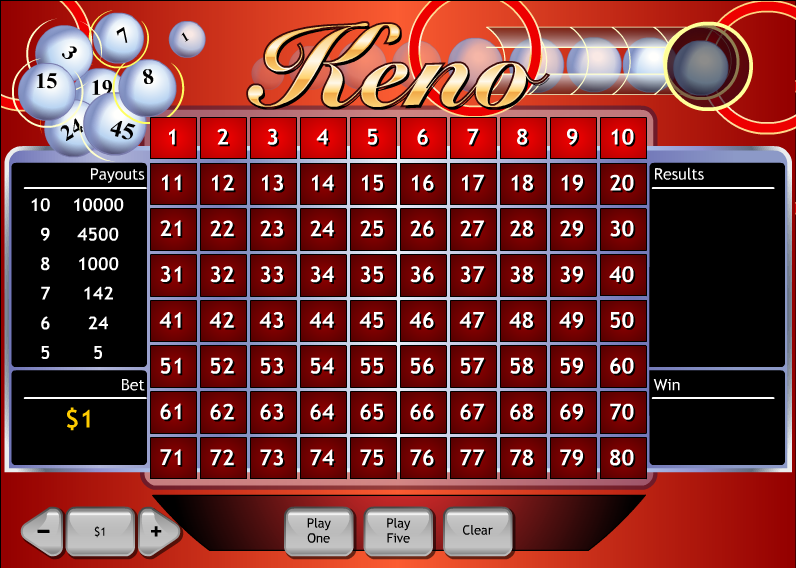 There are a number of different Keno-themed games available to play at the various online casinos we recommend and they each offer something a little different to the discerning Keno fan. For those unfamiliar with Keno it’s a little but like bingo in that balls are drawn and placed on a numbered grid, hopefully matching the numbers you have previously picked. There are differences though and we shall explain more below.

Fortune Keno is one of the more basic examples of this game out there compared to others such as Electracade’s Hi Tech Keno and Net Entertainment’s Keno but the rules of the game remain the same.

When you first load up this game you will be faced with a 10 x 8 grid filled with numbers from one to eighty. Your current bet and any payouts are shown to the left of the grid while the results of each game will be displayed on the right hand side.

Your next job is to pick between two and ten numbers on the grid and you are hoping that the balls drawn out of the machine match enough to win you some cash.

Kick things off by selecting your desired stake per game by using the ‘+’ and ‘-‘ buttons in the bottom left hand corner. Now’s the time to click on the grid to pick between two and ten numbers. As you do this the odds for matching numbers will be displayed in the Payouts box.

Now just use the ‘Play One’ or ‘Play Five’ buttons underneath the grid to start proceedings. Playing five will run five games in a row automatically for you using the same number selections.

Twenty balls will now be drawn and you must hope that enough match the numbers you’ve picked to win you some money. This ranges from one matching number of you’ve only picked two to five matching if you’ve picked ten.

The RTP ranges marginally between 92.09% with two numbers picked up to 92.55% with ten picked.

The two Keno versions we mentioned above are probably more entertaining than this one but it’s a reasonable example of the genre. The RTP is slightly lower than you would find playing this game in a bricks and mortar casino.