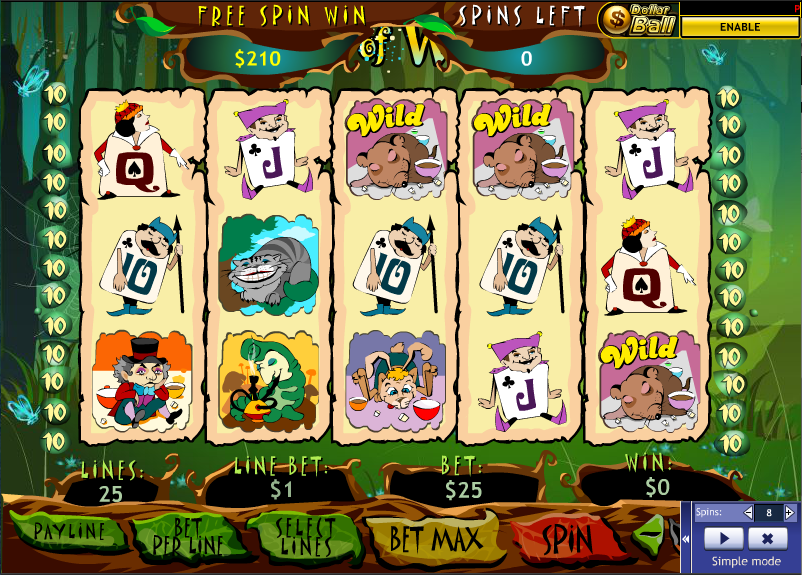 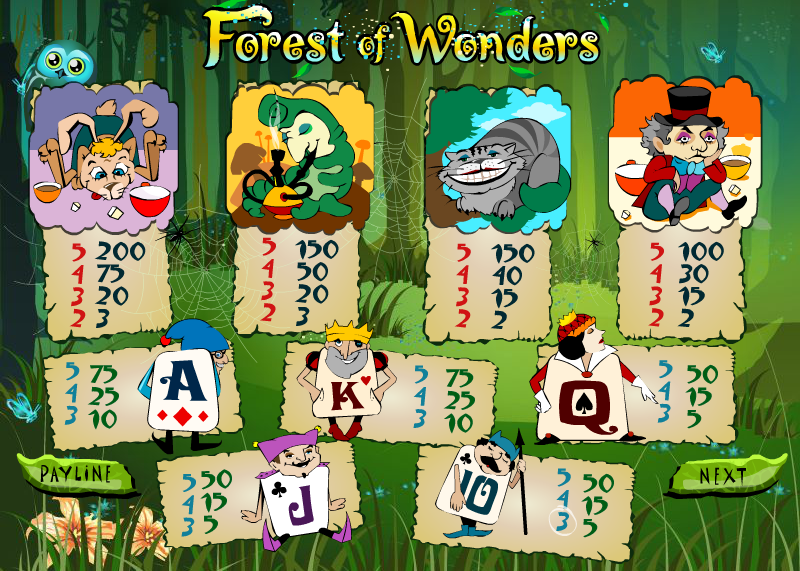 The Lewis Carroll novel, Alice’s Adventures In Wonderland, has provided the theme for a handful of online slots from various developers and here we have one more. Forest Of Wonders is from Playtech and although the names of the characters do not appear here, it’s clear from their looks what this game is themed on. It also features a couple of boys features and a progressive jackpot.

Forest Of Wonders is a five reel and twenty payline game and those reels are set against the backdrop of a hazy forest. The low value symbols are the knaves and their tabards display 10, J, Q, K and A. Higher value symbols are the Mad Hatter, the Cheshire Cat, the Caterpillar and the March Hare.

The sleeping dormouse is wild, the mushrooms are a bonus symbol and the White Rabbit is the scatter.

Picking mushrooms is the key here and you need to land three of more of those symbols an active payline; you will now be whisked to a screen displaying twelve mushrooms where you must pick three. Each will reveal a prize which will be totalled. You can accept this prize or pick another three if you think you might have better luck. This can be done four times.

Triggering this round with four of five mushrooms will add a multiplier of 3x or 10x respectively.

Forest Of Wonders features Playtech’s Dollar Ball jackpot and to take part all you need to do is click on the ‘Enable’ button in the top right hand corner of the screen. It’s a lottery-style game where you pick five numbers from forty nine and on each spin a draw is made. Matching all five numbers will win you the jackpot while four numbers will win you 1% of the total. It costs a but extra to play the Dollar Ball.

Although the free spins are just as likely to be won however many paylines are active, the Mushroom Bonus can only be won on an active payline. Play as many paylines as possible to give yourself a better chance of triggering that feature.

Forest Of Wonders may be a little dated but it’s still quite engaging with some nice sound effects. The two bonus features keep players pretty busy and of course a progressive jackpot is always welcome.