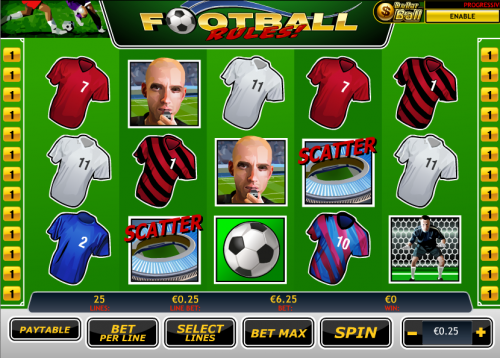 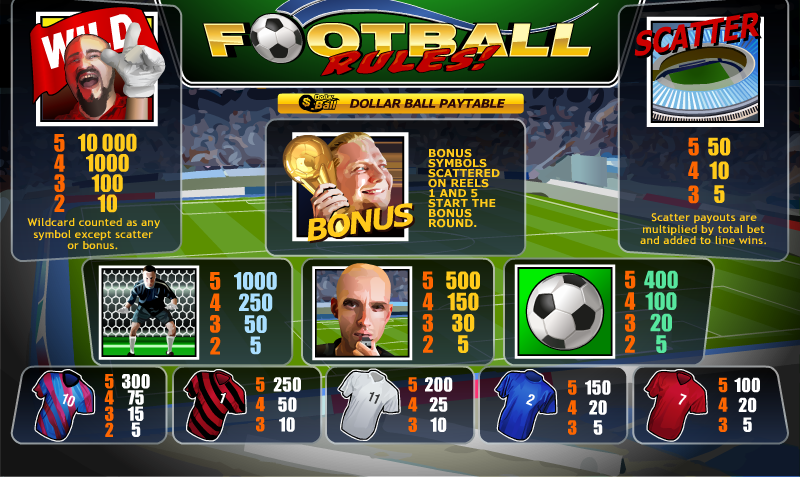 Any type of sport tends to lend itself pretty well to a slots conversion and what sport could be better than the world’s favourite game; Playtech‘s Football Rules is a simple to play, footie-related online slot machine which chucks various football themes into the mix to come up with a very playable game.

It’s a five reel and twenty five payline game which is appropriately set on a football pitch; there are no boring playing card symbols here and everything is related to the beautiful game.  There are five football shirts – red, blue, white, red/black and red/blue – a football, a referee (Pierluigi Collina?), a goalkeeper, a stadium scatter symbol, a supporter wild symbol and a bonus symbol which looks suspiciously like Bobby Moore holding the World Cup in 1966.

This is a fairly simple game and there’s only really one bonus game which can be triggered by landing the Bobby Moore/World Cup symbol on reels one and five.  If you manage this you will be whisked to a screen where you will be allocated between one and twenty spins by choosing a football.  Then grab some multipliers of between 2x and 10x by selecting which direction to take a penalty.

The ideal is of course to get 20 free spins with a 10x multiplier so you can instantly retire.  If you land the bonus symbol on reels and five again you’ll get another five spins.

The Dollar Ball feature is an extra game you can play if you click the ‘Enable’ button in the top right hand corner; it’s a lottery-type competition where you pay a little extra on top of your stake and pick five numbers from forty nine.  Each spin will be a new draw and you can win money by matching any or all of the five numbers you have picked.  Five matching numbers will win you the progressive jackpot.

While this may look like a simple sort of slot, don’t let that put you off, especially if you’re a football fan; it’s an addictive sort of game once the reels start spinning and the bonus game is always worth striving for.