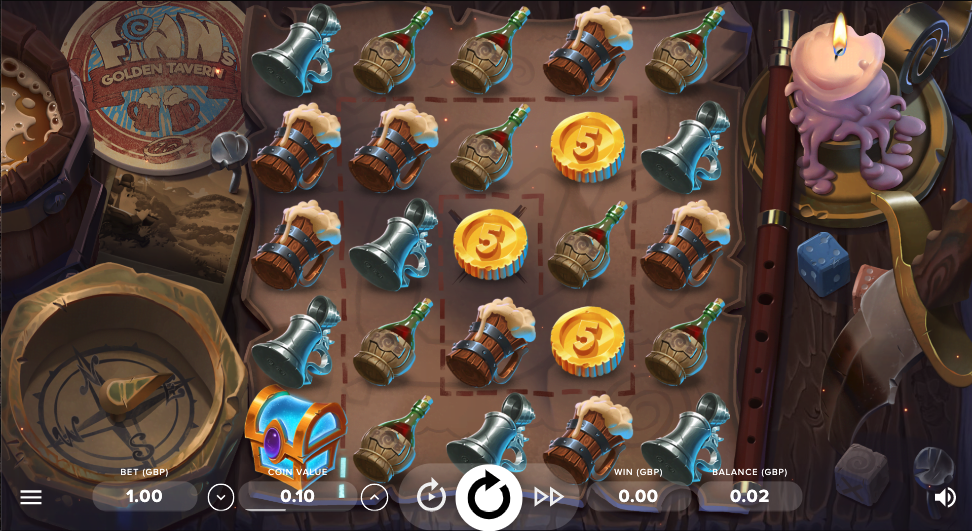 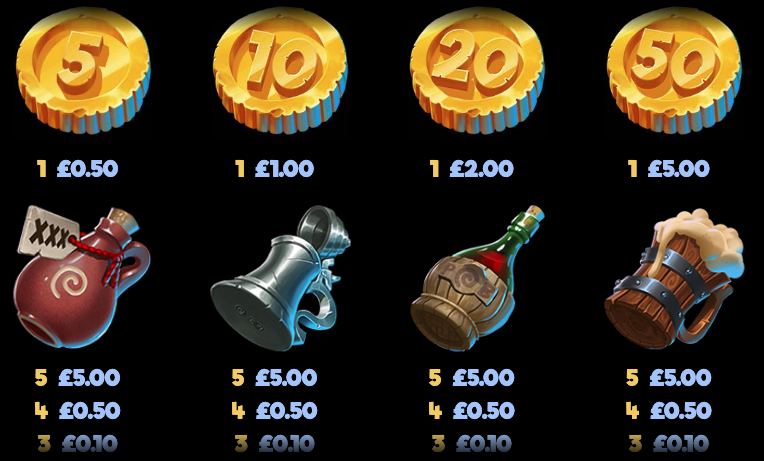 Finn & The Swirly Spin from Net Entertainment has been one of our favourite online slots since its release so we’re pleased to bring news that our favourite Irishman has returned in Finn’s Golden Tavern and the popular spiral gameplay mechanic is retained in this new pub location, albeit with a different bonus feature.

A table top in Finn’s Golden Tavern is where all the action takes place and your task is still to form winning combos which disappear, allowing the spiral to move and potentially create more matches; the detritus of a pub table such as beer mats, candles, dice and (for some reason) a compass.

The four theme-related symbol are all drinking vessels – a jug, a tankard, a bottle and a wooden mug; gold coins with values attached are the lower value symbols.

The wild symbol is the star with the eye patch and it will replace all standard symbols to help create winning combos – it’s only created when this happens. The treasure chest is the special symbol which needs to reach the central position for the bonus magic to happen.

This may occur randomly after a non-winning spin as long and a coin will be moved to form a winning combo as long as there are two coins adjacent to each other elsewhere on the reels.

This can occur after a spin ends and one or two low value symbols in the central position or those immediately surrounding it will transform into coins.

Your ultimate task is to form enough winning combos and ‘avalanches’ that the treasure chest reaches the central position – five free spins will then be awarded. During this round every wild symbol created will increase the multiplier meter by one stage with five stages then increasing the multiplier for all subsequent wins by 1x.

If the treasure chest reaches the centre again the Coin Bonus feature is awarded in which coins are randomly placed on the reels until a win is guaranteed.

We liked Finn’s original outing and we like this too – Finn’s Golden Tavern dispenses with the bonus unlock features of the first game, replacing them with some simpler bonuses to good effect. Highly recommended and very enjoyable.