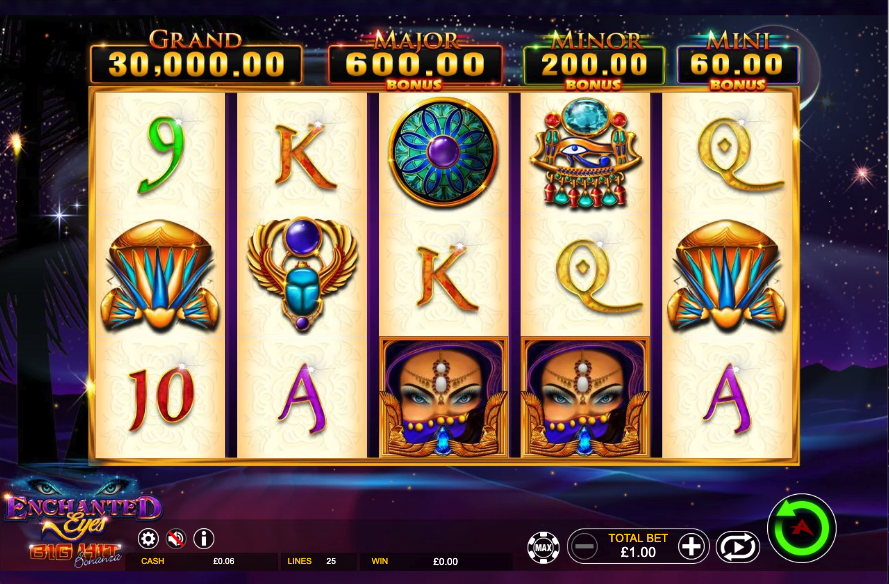 Ancient Egypt has provided us online slots fans with the theme of many a game and here we have one more to enjoy – it’s called Enchanted Eyes Big Hit, it’s developed by Ainsworth Gaming and it offers players free spins and the chance to win the big, jackpot prize.

Enchanted Eyes Big Hit is a five reel slot with three rows and twenty five fixed paylines; stars and fireflies twinkle in the night sky behind those reels which float above the warm desert sands.

The high value symbols include various god-related items such as neck pieces, ankhs and a decorative Eye of Ra; 9, 10, J, Q, K and A make up the lower values.

The princess is wild, she appears only on reels two to four and she will substitute for all other standard symbols to help form winning combos; the ‘Bonus’ and the pyramid are the special symbols which are the key to the main feature.

This is triggered by landing at least six of the pyramid scatter symbols anywhere in view (they’re stacked on the reels); you’ll receive an initial three free spins but also one or two more for each pyramid in view.

All pyramids are held in place and any more landing will also be held, resetting the initial free spins to three again; there are no payline wins during this round but each extra scatter that lands will award a multiplier of up to 50x the total bet. The free spins collected via the original scatter symbols will be played after this first part has finished.

Filling the reels with pyramids during this round will award the Grand Prize shown above the reels.

This is a randomly occurring feature similar to the Big Hit round but this time, when the free spins are underway the princess appears and landing 4/5, 6/7 or 8/9 will earn you the Mini, Minor or Major prizes respectively.

Enchanted Eyes Big Hit comes with the slightly underwhelming graphics typical of Ainsworth Gaming but on the other hand it’s a slot with a variety of bonus feature sot enjoy – it’s a nice enough addition to the ranks of Egyptian-themed games.