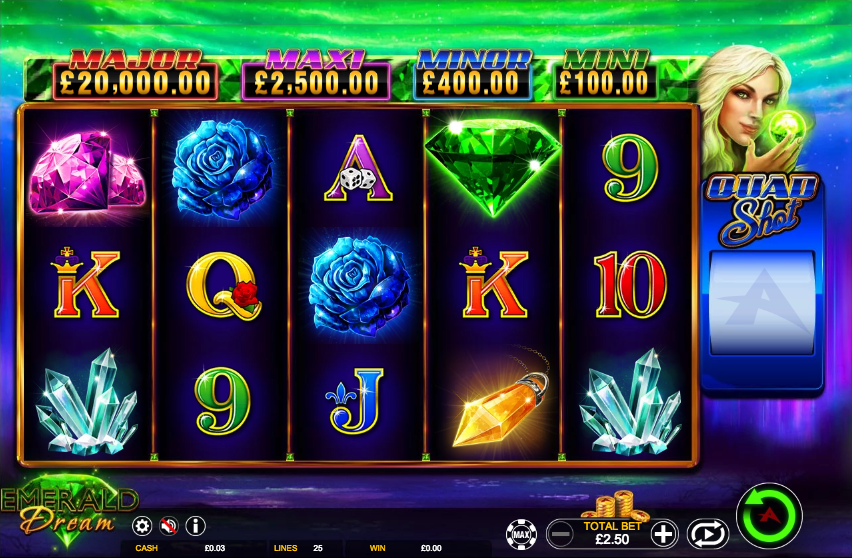 Not all online slot machines have a theme which is obvious and we would say that Emerald Dream Quad Shot falls into this category; there are jewels, flowers and lots of pretty colours but that’s about all we can make out of this releases from Ainsworth Gaming. See what you think……

Emerald Dream Quad Shot is a five reel slot with three rows and twenty five fixed paylines; a glowing green sky squats over those reels while the yellow-haired girl clutches her emerald on the right hand side. The jackpot prizes are shown above the reels and the Quad Shot symbol is the single row reel to the right.

The high value symbols are all jewels of various colours – purple, blue, light blue, red and yellow; 9, 10, J, Q, K and A make up the lower values.

The girl with the emerald is wild and she will replace all others to help form winning combinations except for the green emerald scatter symbol.

This is triggered by landing at least three of the emerald scatter symbols anywhere in view and you’ll receive an initial eight free spins but each time two scatters land on reels one and five during this round you’ll be awarded three more.

An extra wild – the Bonus Lady – appears stacked on reels two, three and four in this round and landing seven, eight or nine of her will award a prize of 10x, 25x or 50x your total stake respectively.

Emerald Dream has same idiosyncratic design of other Ainsworth Gaming slots but you get a bit more bang for your buck with this one such as an enhanced free spins round and the inclusion of the Quad Shots feature. The RTP is a slightly-lower-than-average 94.09% but that’s still within the bounds of respectability.