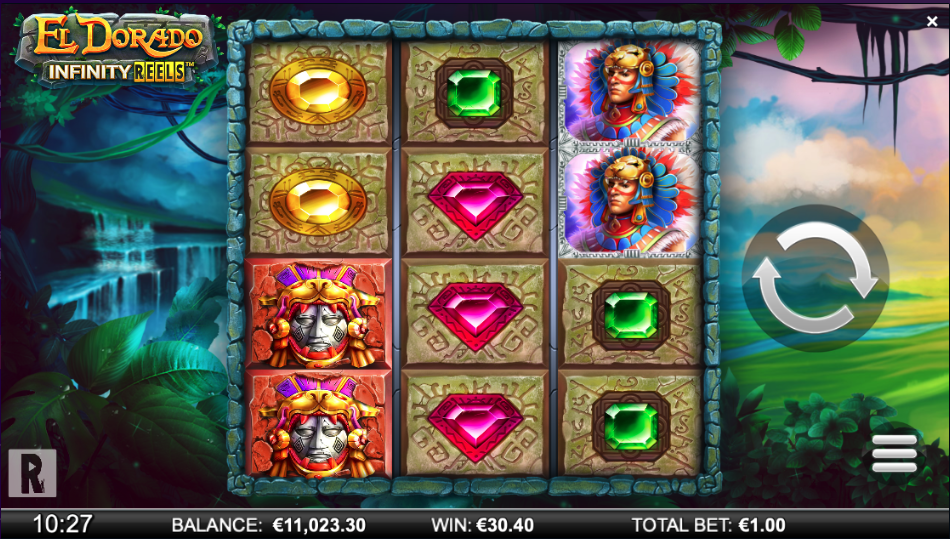 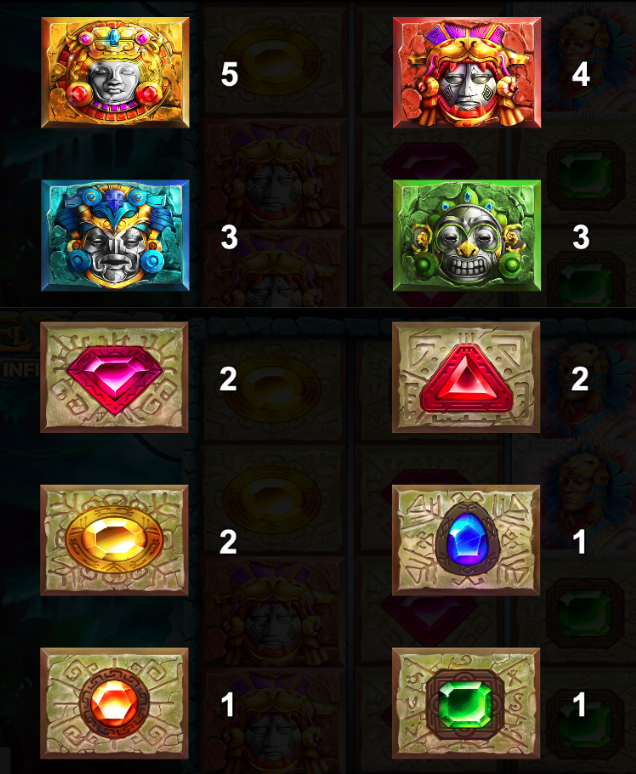 On their South American adventures the various legends swirling around El Dorado kept the Spanish invaders busy for quite some time; this online slot from Yggdrasil Gaming brings the famous tales to the spinning reels in El Dorado Infinity Reels, a game which tempts players with free spins, jackpot prizes and a potentially endless number of reels.

El Dorado Infinity Reels starts out as a three reel slot with four rows and the aim is to land at least five matching symbols (or wilds) starting from the left hand side – this means that a stack on reel one and one more match on reel two will result in a win. Mountains, plains and waterfalls create the pleasant backdrop.

The four higher value symbols are traditional stylised masks in yellow, red, blue and green while six coloured gems represent the lower values; the native is wild and the golden temple is the scatter symbol.

Every spin begins life with three reels but if you can land a win in which reel three is part of the combo then an extra reel will be added on the right hand side; this process continues until no new reels are added and the total payout is calculated.

In addition the win multiplier (which starts at 1x) increases by 1x with each added reel – there’s no limit to the number of extra reels or multipliers which can be earned.

If you’re one of the really lucky players who manages to add at least twelve reels then a Jackpot Prize of 888x the stake is awarded.

Landing at least five of the temple scatter symbols anywhere in view will activate this feature and it’s a but different so here goes:

On the first trigger you’ll be offered the chance to do one of the following:

There are four levels of free spins and the difference between them is that the win multiplier for each new reel added increases by 1x, 2x, 3x or 4x in levels one, two, three or four respectively.

Each golden temple which lands during the free spins will add an extra four spins to the total.

We always like to try out something a little bit different and El Dorado certainly offers that – it’s quite low variance so you’ll need those extra reels to grab any decent wins but it’s an all-action slot with some clever features – highly recommended!

Yes! Infinity Reels with increasing multiplier wins, free spins with even bigger multipliers and a jackpot prize of 888x.

The Return To Player percentage for El Dorado Infinity Reels is 95.50%.

How To Win On El Dorado Infinity Reels?

Land at least five matching symbols or wilds starting from the left hand side; trigger the free spins.

Where can I play El Dorado Infinity Reels then?