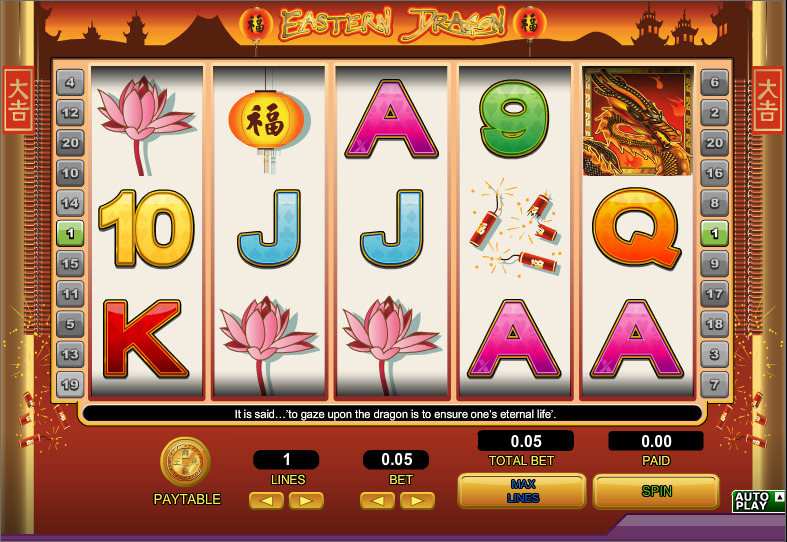 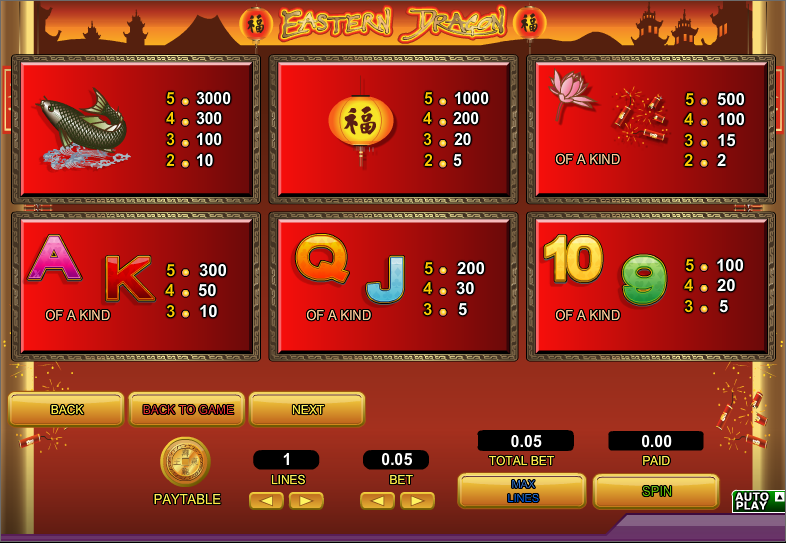 In the world of online slots there’s no shortage of supply when it comes to Oriental-themed games and here we present one more to add to that ever-expanding list. It’s called Eastern Dragon and it’s developed by Nextgen Gaming, a company who already have similarly-themed games such as Emperor’s Garden and Samurai Princess available to play.

Eastern Dragon is a five reel slot with three rows and up to twenty paylines; the backdrop is understated but there are some nice Chinese-style buildings silhouetted against the setting sun. Firecrackers are exploding on either side of the reels.

Some familiar Oriental symbols represent the higher values and these include some sparkling firecrackers, a lotus flower, a Chinese paper lantern and a Koi carp. Lower values are the usual 9, 10, J, Q, K and A.

The wild symbol is an angry-looking dragon and it only appears on reels one and five; it substitutes for all other symbols except the scatter and will multiply all wins to which it contributes by 2x. The scatter is the oft-used Chinese dollar.

The dragon wild symbol is also what you need to trigger the free spins and you can do just that by landing it on reels one and five in the same spin. If you’re lucky you’ll get a decent wild win after which you’ll receive fifteen free spins.

During these spins all wins will be subject to a 3x multiplier and the last bit of good news is that more spins can be re-triggered by landing more wilds on reels one and five during this feature.

There’s not much wrong with Eastern Dragon but it’s not as graphically sophisticated as Nextgen’s other Oriental offerings such as those mentioned above. There are some nice animations when you hit a winning combo though and a reasonable RTP of 95.22%.