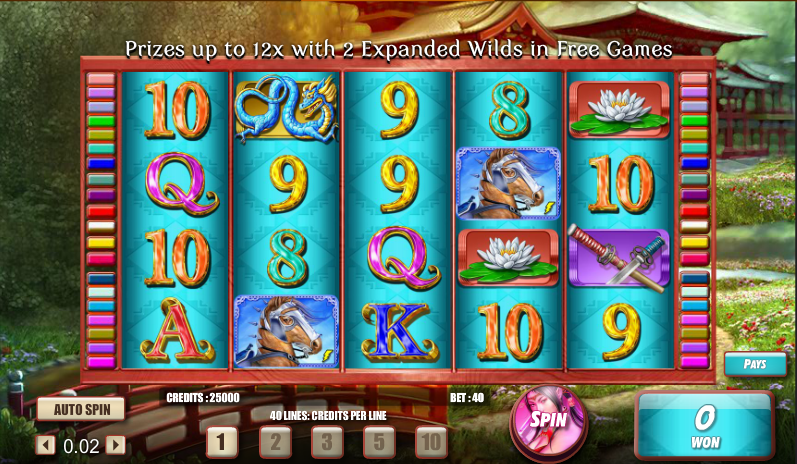 Trips to the mysterious Orient are a regular occurrence if you like to play online slots and there’s one more in store here. Samurai Princess is a NextGen release which transports us back in time to when samurai warriors roamed Japan. In this case the warrior is a female one who will be good enough to reward us with free spins if we can land the correct combinations.

Samurai Princess is a five reel and forty payline game and the backdrop to those reels is an intricately drawn Japanese scene showing a traditional building surrounded by a typical Japanese garden.

The lower value symbols are represented by the usual 8, 9, 10, J, Q, K and A but the higher value ones are a little more interesting and include a white lily, a pair of Japanese Katanas and a blue and gold dragon.

The pink clad princess herself is the wild symbol and the scatter is a horse which activates the main feature.

There’s just the one bonus feature in this game and it’s triggered by landing three or more of the horse scatter symbols anywhere on the reels.

As well as the scatter prize you will receive seven free spins which doesn’t sound like much and it isn’t really, especially if you like this type of feature. What you do get however is an expanding wild during the spins which only appear on reels two and four – if they help to create a winning combo you will receive a multiplier for that win of up to 12x, so it’s not all bad.

You can play with as many or as few paylines as you like and still have the same chance of triggering the free spins because they are activated by the scatter symbol. The more lines you play though, the higher the prizes will be.

This game looks really nice but arguably doesn’t have enough content to engage the player for too long. The scantily clad princess will probably appeal to a certain demographic though.