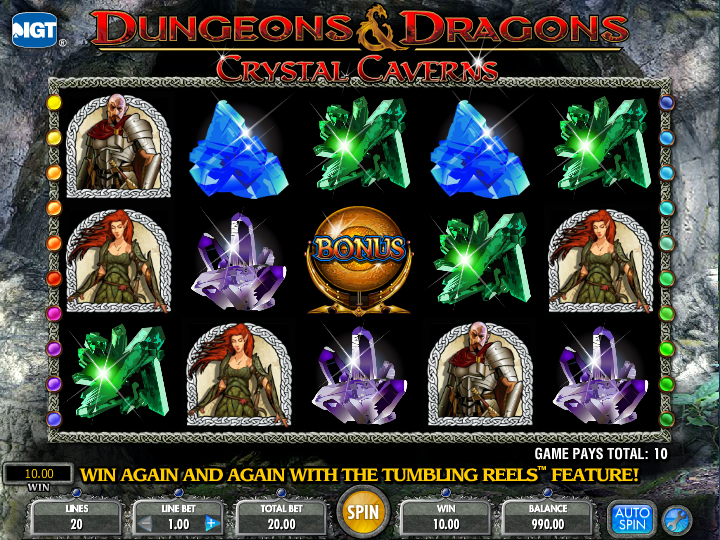 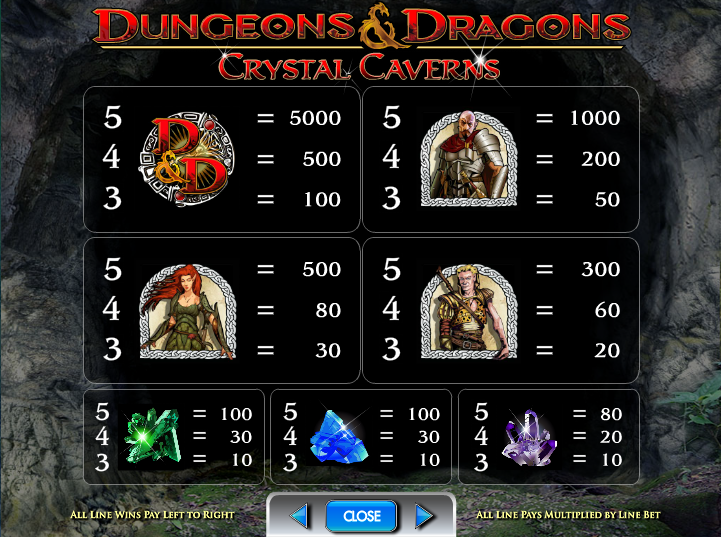 The concept of Dungeons & Dragons needs very little explanation but for the uninitiated it’s a turn-based role playing game in which you make your way through a fantasy world filled with mystic creatures, strange characters and of course dungeons. Crystal Caverns joins IGT’s Treasures of Icewind Dale in this genre and it’s certainly an interesting conversion into an online slot.

Crystal Caverns is a five reel game with twenty fixed paylines and although it’s not quite as graphically impressive as Icewind Dale it still looks good. A cave entrance forms the backdrop to the reels which are framed with a Celtic design.

In the base game the symbols are purple, blue and green crystals along with three characters who presumably are our adventurers. The D&D logo is the most valuable. There’s also an elaborate wild symbol and a gold bonus symbol which activates the feature.

During the feature there are different symbols and these include three monsters, four ornate pieces of jewellery and the D&D logo again. The bonus logo also appears here.

This is something we always like and this is how it works – every time you land a win in the base game or free spins, those symbols will disappear to be replaced by new ones falling from above. If these form another win the symbols will be removed again and the process will repeat. It’s almost like getting free spins every time you win.

This feature is triggered by landing three of the golden bonus symbols on reels one, two and three of a payline. You will receive an initial six spins on a different set of reels and more spins can be won as follows:

During the spins the monster symbols act as scatters meaning that three or more anywhere will win a prize. It’s not possible to win more than 300 spins in this feature.

The fixed paylines mean that there’s very little interactivity here which means we have little to offer in the way of advice. Leave the sound on though for some fantasy music accompaniment.

Any slot with this tumbling reels feature is off to a good start as far as we’re concerned.  Add in a funky free spins feature and some nice graphics and this is a winner.