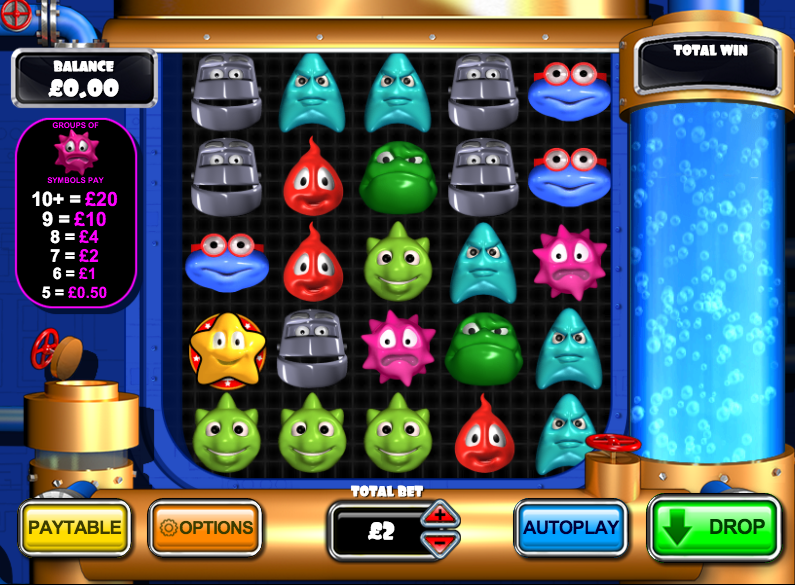 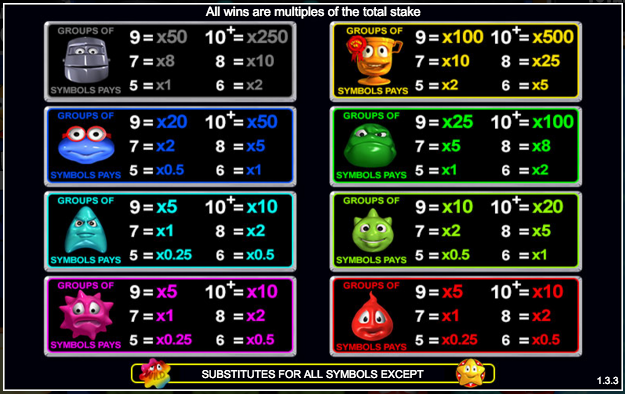 We always like to see an online slot with an exclamation mark in the title and that’s the case with Drop It! It’s developed by Playtech/Virtue Fusion and it’s really more of an arcade-style game similar to Bejeweled and Chain Reactors. It’s colourful, cheerful and includes plenty of bonus features which are all described in more detail below.

Drop It! is played on a 5×5 grid on quite an industrial background with a column of blue liquid on the right hand side and plenty of pipework. The music is a bit overpowering so you may want t reach for the mute button.

The aim of Drop It! is to land groups of at least five matching symbols joined horizontally or vertically; those symbols are a range of coloured creatures – blue, light blue, pink, orange, grey, green, light green and red.

There’s a wild symbol which is a rainbow star and it substituted for all others except the scatter – that’s represented by a gold star creature.

This is a picking round triggered by landing three of the gold star scatters anywhere in view. The screen will change to one showing a grid of bombs which you must pick to reveal cash prizes and multipliers. The round is over when you find the dud.

This is triggered by landing four of the golden star symbols anywhere in view and you will receive ten free ‘drops’. On each drop a random multiplier of up to 10x will be awarded.

This is the biggest bonus and it’s triggered by landing five of the golden star scatters anywhere on the grid. This time there are fifteen free drops on offer with a multiplier of up to 15x on each drop – not too shabby!.