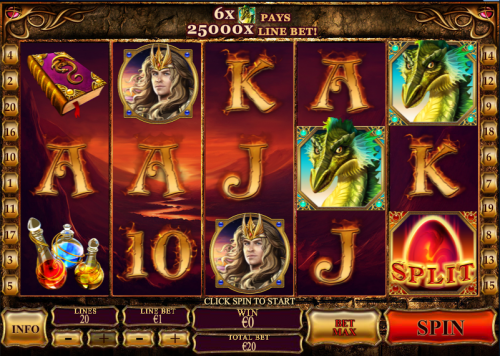 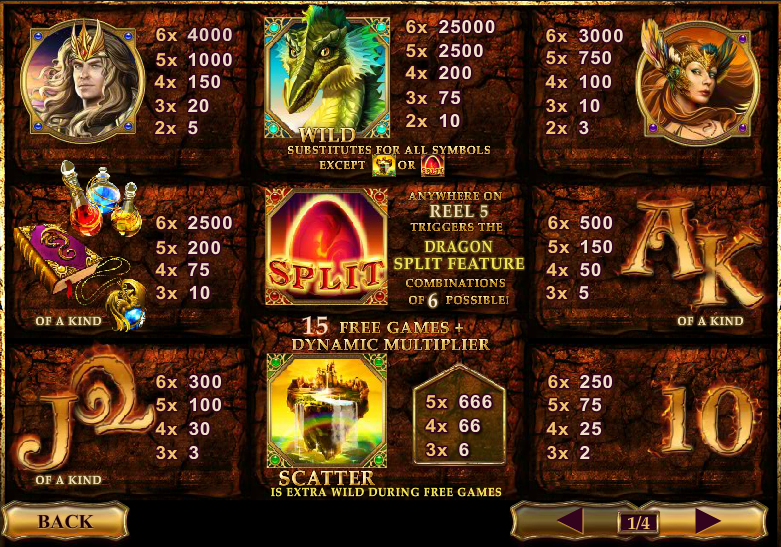 Online slot machines based on themes of fantasy always offer plenty of scope for impressive graphics and varied bonus games and Dragon Kingdom from Playtech is an addition to the genre which should satisfy most slots fans.

As the name suggests, Dragon Kingdom uses dragons as it’s theme and the graphics include plenty of soaring, fire breathing dragons to spice up the gameplay.  It’s a five reel and twenty payline slot which uses Playtech’s standard playing cards as the low value symbols while the higher value ones are theme-related.  That being the case we have a spell book, beakers of potions, and male and female characters.

The wild is a dragon and the scatter symbol is a beautifully-drawn floating city in the sky; there’s also a ‘split’ symbol comprising a dragon’s egg of which more below.

We’ve seen this feature before on one or two other Playtech slots (Blade for example) but it’s a nice innovation; if you land the Dragon’s Egg on reel five and a winning combo on the same spin, the last symbol in that combo will be sliced in two, creating two identical symbols and adding to your win.  Combos of six symbols are now possible!

This bonus game is triggered by landing three or more of the floating city symbols anywhere on the reels; the prize for this is 15 free spins with a ‘dynamic’ multiplier.

The multiplier works as follows – you’ll be allocated a multiplier of between 2x and 5x at the start of the free spins and after each winning spin it will increase by one (to a maximum of 5x).  That’s the good bit but the bad news is that each time you fail to win it will decrease by one also (to a minimum of 2x).

During the free spins round, more spins can be won infinitely by landing another three or more floating city symbols.

Dragon Kingdom certainly conforms to the usual high Playtech standards; the graphics and animations are nice and the split feature adds a little something extra.

€0.01 is the minimum bet per payline but high rollers will appreciate the opportunity to splurge €1,000 per spin.