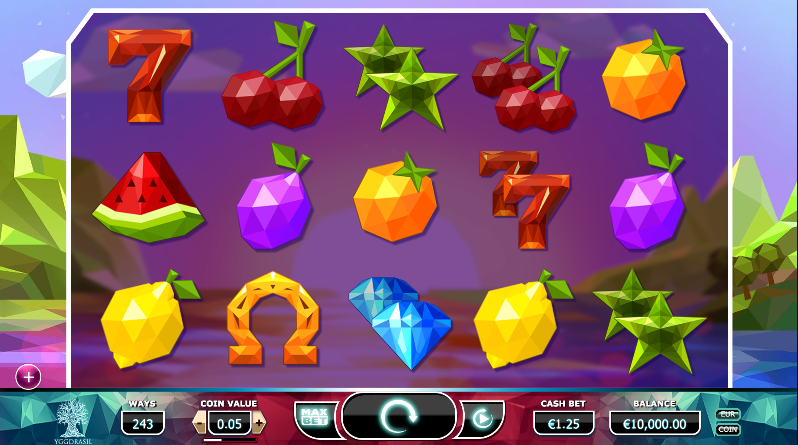 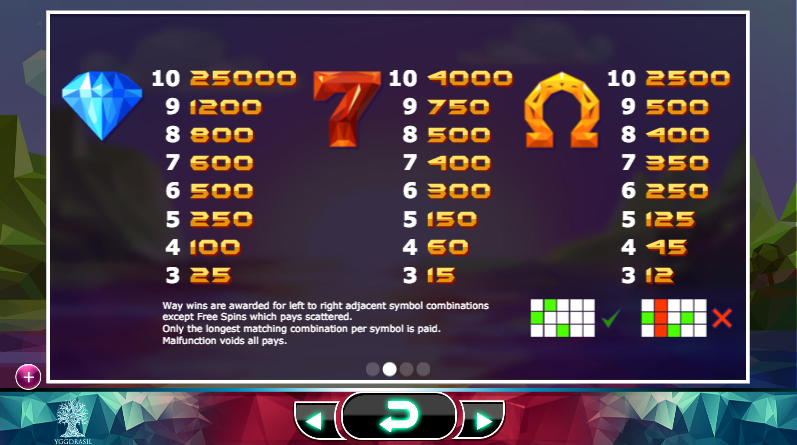 There’s no doubt that Yggdrasil Gaming turn out some decent online slots and we are pleased to bring you details of one more to add to that list. It’s called Doubles and while the gameplay is relatively basic it features some unusual graphics and the ‘Doubles’ concept which we’ve seen before but not quite implemented in the same way. Read the full review below for more information.

Doubles is a five reel slot with three rows and 243 ways to win – there’s no payline structure and winning combos are formed as long as there are matching symbols on adjacent reels starting from the left hand side. The game is set in some sort of blocky, sparkly fantasy land which we can just make out through the hazy transparent reels.

The symbols are all traditional and fruity but designed in a way reminiscent of cut diamonds – they include plums, lemons, oranges, watermelons, cherries, kiwifruit, horseshoes, sevens and diamonds. The ‘Double D’ symbol is the scatter which activates the feature.

The game is called Doubles because some of the symbols on the reels contain two of that icon, meaning that paylines containing up to ten matching symbols can be formed.

This round is triggered by landing three, four or five of the Double D scatter symbols anywhere in view. You’ll now receive ten, twenty or forty free spins respectively but first of all you need to pick a symbol, all of which will be turned into doubles during this phase. You can choose a less valuable symbol for more wins or take a punt on a higher value for fewer wins.

More spins are available if you can land three or more Double D scatters during this round.

Doubles is a pleasure to play because of the quirky graphics and regular wins provided by the double symbols. Wins of up to 25000x your line stake are possible with ten symbols on a payline and there’s an RTP of 96.00%.