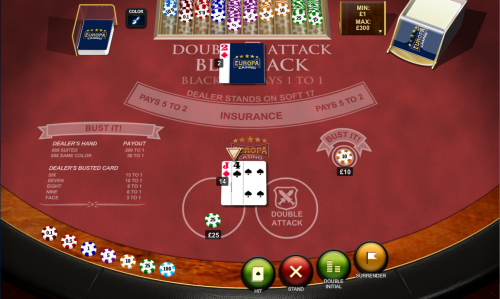 We’ll move away from the more usual online slot machine review for this article and check out one of Playtech’s non-slot varieties.  Double Attack Blackjack is one of the slickest Blackjack simulators we’ve seen for some time; it’s a full screen, graphically impressive game which comes as close to a bricks and mortar game as you could wish.

The first thing to say about Double Attack Blackjack is it may not be a game for the purists; there are a number of rule variations and extras involved in the game which may well break the rhythm of a genuine Blackjack enthusiast but we think everyone should give this a try if only for a few minutes.

We’ll start by describing the basic game mechanics and then talk about the extras offered in-game.  You are initially presented with a Blackjack table with the chips, cards and dealer (out of sight) on the far side with two wagering circles in front of you.  In the circle on the left you place you first bet, the dealer will then deal one card face up to himself.  This card should then help you decide whether you want to double your original stake or not.  You can now either place another chip on the “Double Attack” circle on the right, press the “Double Attack” button or do nothing by pressing “Skip Double Attack”.

The dealer now deals your two cards plus another face down card for himself; at this point you will get a chance to Hit, Stand, Double Initial, Split or Surrender in accordance with usual Blackjack rules.  Where this game differs is that you can split more than once up to four times to maximise the chances of winning.

The extra features that differentiate this game from standard Blackjack are as follows:

The “Double Attack” as described above.

Bust It! – This adds an element of fun to the game and an extra chance to win some money.  Essentially you can place a bet on how the dealer will bust on each hand.  The payout chart is as follows:

There’s a small circle labelled “Bust It!” to the right of the main betting circles where you can place your bet and for the game in general there’s a “Rebet and Deal” button to repeat the last bet.

Double Attack Blackjack is well worth a look, even for the Blackjack purists; you can bet £0.10 up to £300 on your first bet but if you add the maximum £50 wager on Bust It! and then double up when you get the chance, you can wager £750 per deal.