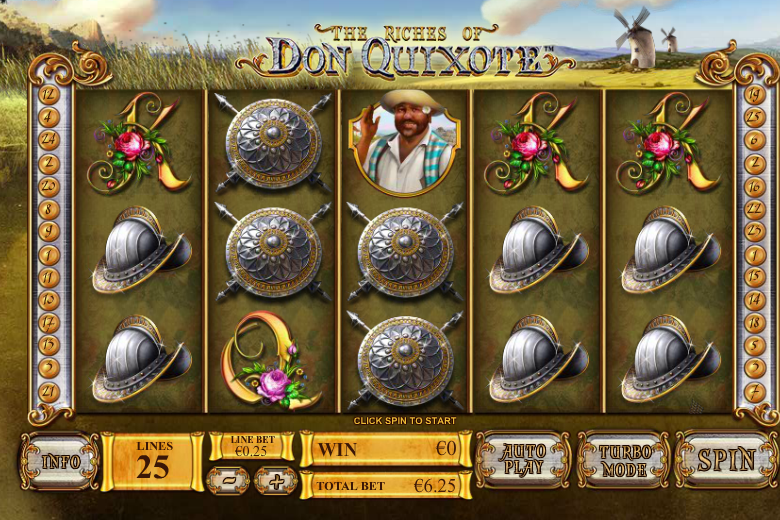 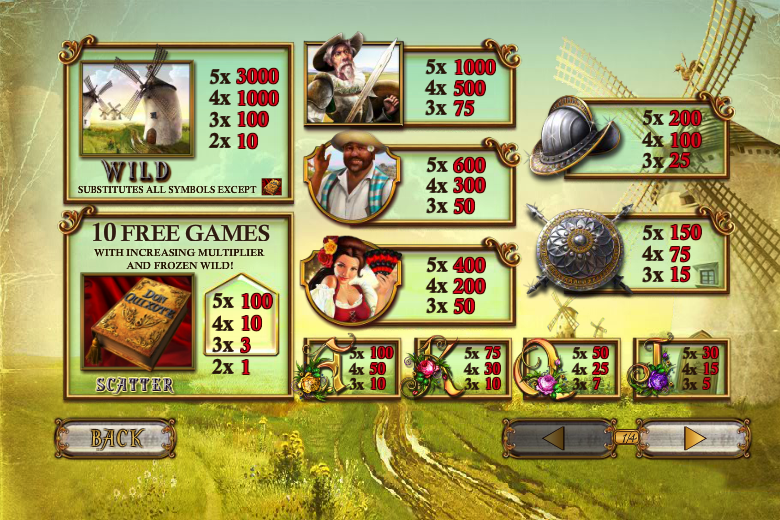 As all online slots fans know, Don Quixote is the eponymous character of Miguel de Cervantes early 17th century novel; Quixote is the chivalrous fantasist to Sancho Panza’s down-to-earth persona and the book is considered very influential in literary circles. Enough of that though – this Playtech slot is of course based on the book and very nice-looking it is too; read the full review for all the essential details.

Don Quixote is a five reel slot with three rows and twenty five fixed paylines; a 17th century Spanish landscape stretches away into the distance behind the reels with nicely animated windmills and fluffy white clouds.

There are five high value symbols including Don Quixote, Sancho Panza, a girl, a helmet and a shield; flower-adorned J, Q, K and A are the lower values. All symbols except for Don and Sancho are stacked two high on the reels.

The windmill is the wild symbol and it substitutes for all others except the scatter which is represented by Cervantes’ novel itself.

This is the only feature in this game and it’s triggered by landing three or more of the Don Quixote novel scatter symbols. You are now awarded ten free spins so just click the ‘Continue’ button to kick things off.

For the duration of the spins a windmill wild will be present on the centre position of reel three to help you along. Additionally there’s an increasing multiplier for any wins which starts at 1x but increases by 1x every two spins.

Unfortunately it’s not possible to re-trigger any more spins from within this round.

Don Quixote is a really good-looking game which would perhaps benefit from more in the way of bonus features; the free spins round seems quite easy to trigger though and quite lucrative so that’s all good. The RTP is 94.99%